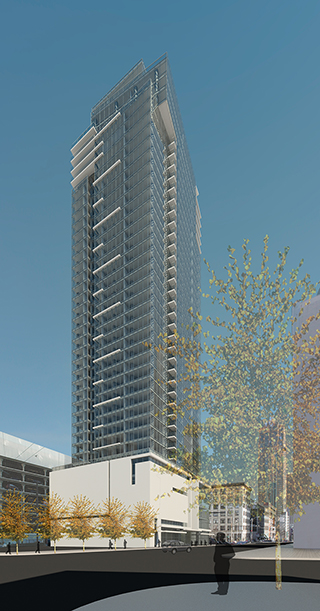 The design proposal calls for about 375 apartments, 3,000 square feet of retail space and 300 parking stalls.

Weber Thompson Architects of Seattle and GbD Architects of Portland are designing the building in a partnership called WTGBD, PLLC.

Weber Thompson Senior Principal Blaine Weber said in an email, “Both firms will continue to operate independently, but we hope to continue our very successful joint venture partnership beyond this project.”

The tower will take up less than half of the half-block site, a parking lot, that Equity purchased last year for $22 million.

A representative of the real estate investment trust did not return a call Tuesday afternoon regarding the firm’s plans for the rest of the site.

Cyndi Wilder, a public relations specialist with Seattle’s Department of Planning and Development, said Equity could build up to 125 feet in the remaining space, but it hasn’t filed plans for more.

According to the design proposal, the 40-story building will be a “slender and sculpted tower” tower on a podium with a terra-cotta facade. The podium will house four levels of parking with micro apartments at the corners to screen the stalls from the street. The podium will also house retail space.

The tower will have at least two levels of underground parking, a residential lobby and lounge, and two amenity spaces: one on top of the podium at the sixth level and the other above the 39th floor.

The architects said in the proposal that the tower’s facades will be broken into layered vertical elements, and there be an architectural element at top.

An early design guidance meeting is scheduled for 5:30 p.m. Tuesday at City Hall. Go to http://tiny.cc/zz9cww to see the design proposal.

The site is west of Macy’s parking garage along a busy route between Pike Place Market and the retail core.

The site’s previous owner was Starwood Capital Group of Greenwich, Conn. Starwood was a development partner with Paul Brenneke’s Avalon Holdings, but bought out Brenneke’s interest in 2008.

Equity Residential buys, develops and manages apartments in the U.S. It owns or has investments in almost 128,000 apartments.

According to its 2012 annual report, Equity started about 10 years ago shifting away from two- and three-story walk-up garden apartments in suburban locations towards higher density urban properties in a few gateway cities in the Northeast and on the West Coast. The goal is to focus on cities where knowledge-based jobs, such as tech and health care, will be created and where“Echo Boomers” want to live.

Given that thinking, Equity has sold billions of dollars of apartments in secondary and tertiary markets, and reinvested the proceeds in Boston, New York, Washington, D.C., Southern California, San Francisco and Seattle.