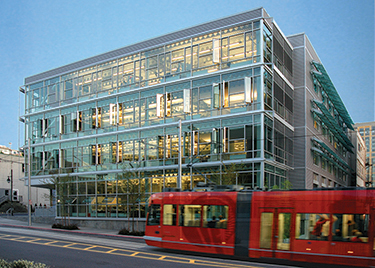 Tenants of The Terry Thomas in Seattle's South Lake Union neighborhood are being encouraged to try to reduce the office building's energy use 17 percent by 2015.

The four-story, 40,000-square-foot building at 225 Terry Ave. N. was completed six years ago. It has historically used about 50 percent less energy than a comparable building, according to a press release from Weber Thompson, which designed it.

It was the city's first major office building in decades to be developed without air conditioning. It has operable windows, automated louvers and a courtyard that helps draw air through work spaces.

The building achieved LEED gold certification for core and shell. It contains Weber Thompson's offices, which are certified LEED platinum for commercial interiors.

Weber Thompson and the building's management company, Stephen C. Grey and Associates, are leading the energy reduction effort. The owner is Thomas and Terry Land Associates LLC. The agent for that LLC is First Western Development Services of Edmonds, according to public records.

Environmental graphics and wayfinding signs have been installed to show energy performance data and encourage use of the stairs. The stairwell has data about building energy use and space for tracking data in the future.