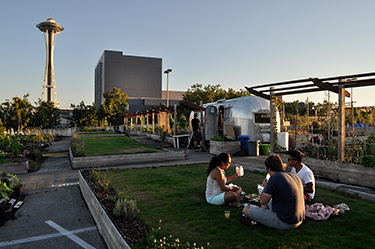 Photo by Eric Higbee [enlarge]
UpGarden transformed the roof with shared spaces, a communal garden and whimsical elements like an Airstream trailer that serves as a tool shed.

The garden on top of a three-story garage near Seattle Center won this year's top award from the Washington Chapter of the American Society of Landscape Architects.

The P-Patch is called UpGarden and it has views of the Space Needle, Queen Anne and parts of downtown. It was designed by Kistler|Higbee Cahoot.

The 30,000-square-foot garden is on Mercer Garage at 300 Mercer St. City officials say it is the first publicly accessible, large-scale community rooftop garden in the U.S.

The shared lawn and picnic table, small seating areas and a communal Giving Garden emphasize the social aspects of the garden, they said.

The space also has whimsical elements, with an Airstream trailer that serves as a tool shed and a Ford Galaxie fashioned into a planter.

“They took an underused structure and gave it new life,” said juror Marsha Lea in an interview this week.

Lea, of Washington, D.C.-based Lea Landscape Architecture, said she liked that the car and trailer now are “focused on gardening as opposed to denigrating our environment. It was just such a nice idea.”

Lea said similar gardens could be created on unused garage roofs in other communities. It is a “relatively inexpensive way to make something productive,” she said.

Another juror, Keith LeBlanc of Boston-based Keith LeBlanc Landscape Architecture, said it was “exemplary” that the landscape architect and engineer could pull off the challenge of designing a community garden for a garage roof.

“So many community gardens look like the junk farm because (they are) not well organized,” he said, but that's not the case here.

LeBlanc also was impressed that the UpGarden design was so good it could be built successfully with volunteer labor.

He mentioned nice touches such as installing planters of different heights to accommodate the slope of the roof, and adding the Airstream and car to the garden.

“It looked like a delightful place to be,” he said.

Seattle Center and Seattle Department of Neighborhoods were the clients for the project, which opened in the summer of 2012.

Clearance in the garage wasn't high enough for dump trucks, so soil was trucked to the site and blown onto the roof with hoses.

The 1960s Airstream trailer, which was found cheap on Craigslist, was lifted by crane onto the roof.

The garden has about 100 plots, communal space, and room for ornamental and pollinator plantings.

Much of the publicly owned space on Lower Queen Anne has buildings or parking lots on it, so the city proposed UpGarden.

Mercer Garage covers almost two city blocks, and is seldom used to capacity. Seattle Center's redevelopment plan calls for the garage to eventually be torn down.