Project of the Month: King Street Station ready for a new century 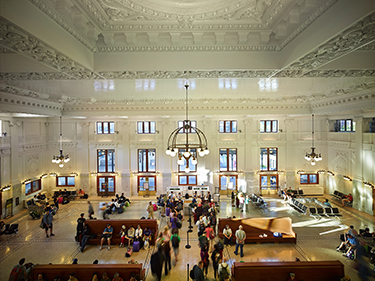 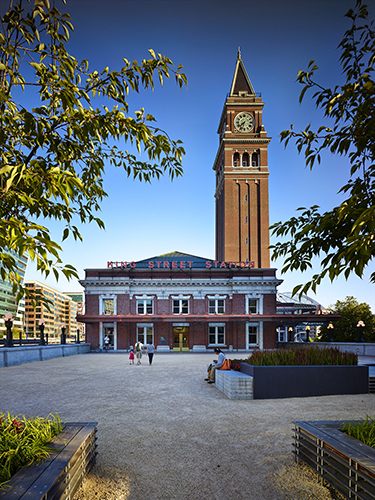 [enlarge]
The station looks out onto the new Jackson Street Plaza, paved with Euro-style granite pebbles. Windows had been boarded up for years. Now the upper floors await a master tenant. 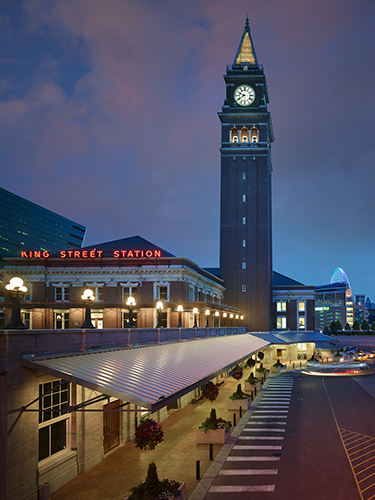 Just before the train leaves for Portland, long lines fill King Street Station. By the look of the crowd, they might as well be tourists boarding an international flight. But they don't need to travel to enjoy some old world grandeur: They're standing on mosaic floors, surrounded by high marble-and-stucco walls and ceilings.

Century-old King Street Station is one of the great rail stations in the U.S., and it is still dedicated to train travel. But that's not all. It's been restored to civic glory, a proud landmark for people arriving and leaving Seattle.

With its restored clock tower, the station is still visible from miles away. After decades of marginalization and decay, the area around the station once again has attractive walking connections at the street level, and helps knit together Pioneer Square, the International District and the Stadium District.

When it reopened last summer after a painstaking restoration, the grand waiting hall had not been seen intact for at least two generations. Now the upper floors await tenants to enliven the civic plaza in front, and take advantage of the prime location near the rapidly redeveloping Stadium District.

The design effort led by ZGF Architects combined urban design, restoration and renovation to save a huge asset for south downtown, and for the entire region.

Tim Williams of ZGF Architects is the project manager. “When you meet someone on a ski lift and tell them you worked on King Street Station, they have stories about it. It's rare to find the kind of cultural connection with projects.”

The station's second life was a long time coming. It was completed in 1906 and designed by Reed and Stem, the same firm that later designed New York's Grand Central Station.

Life as a major transportation hub was cut short by the rise of cars, trucks and highways. The station went on the National Register of Historic Places in 1973, but it had already suffered numerous insults in the form of abusive and piecemeal renovations. A 50s-era dropped ceiling cut into the sculptural plasterwork of the main waiting hall and chopped the original 35-foot ceiling height roughly in half. Decline in train travel over the last century led to more neglect.

But investments in mass transit and rail in the 1990s meant the time was right for rehabbing King Street Station. After years of early design and planning assisted by Otak, the city took the building off BNSF Railroad's hands in 2008 for $10.

About $55 million in state, federal and city funds as well as private grants were spent on the restoration and renovation.

The effort got an early boost with rehabilitation of the 12-story clock tower, which was inspired by the Campanile in Venice. Green-glazed terra cotta tile roofing was also installed, made by the same company that had supplied the original tile.

The civic stature of King Street Station had a special advocate on ZGF's team: the late Greg Baldwin, who had his own slogan for the project: “Securing the future by preserving the past. ”

In the grand waiting hall, high-relief ceilings and walls are combined with fluted Corinthian columns. The lower walls and columns are clad in white marble accented with a strip of glass mosaic tiles.

A massive bronze chandelier dominates the center of the hall.

All of this was restored under a master craftsman who trained locals to do the sensitive work with exacting detail. Terrazzo and mosaic tile floors have been restored, too.

But half of the cost was for seismic upgrades to the unreinforced masonry structure. Behind the artful plaster is 1,345 tons of new steel. Engineering and construction were orchestrated to keep historic elements in their original place. To accomplish this, 35-foot-high slots were cut within the brick perimeter so that the steel could be inserted along with high-strength grout.

Despite the difficulty of bringing a historic building into line with new standards for energy savings, modeling shows that the building can perform more than 56 percent better than basic design standards and meet benchmarks of the Architecture 2030 Challenge.

“We wanted to make it a lasting part of the city by adding all sustainable features,” said Trevina Wang, who was project manager for the city.

Once again, the windows of the station open and ventilation has been fine-tuned. A ground-source heat pump is linked to 68 wells installed under the new Jackson Street Plaza. Along with more efficient fixtures, this system covers all of the building's heating and cooling needs.

The design team gave a lot of attention to the open space and circulation areas around the station, where cars, buses and bicycles come and go on two street levels.

“It's a busy intersection with many moving parts,” said Williams.

One of those parts was not working. In the 1960s, the original grand stairway along the east side connecting the two entrance levels was replaced by an escalator, and by the early 90s it was gated.

Now the escalator is gone and the grand stairway is back. The granite balustrade was rebuilt using stone recovered on site. Replicas of the original globe light fixtures are fitted with efficient LED lighting.

The adjoining Jackson Street Plaza is the station's civic front door. The open space has sculptural raised planters that double as seating. Euro-style decayed granite underfoot has a timeless quality. Cherry trees in the planters were chosen as a nod to the International District. The combination of soft and hard elements link the historic station with the modern city.

The project will be truly complete when there are people in open space. The rehab has yielded 30,000 square feet of leasable space on the second and third floors, served by historic hallways and a mezzanine that overlooks the waiting hall.

“It's really a great spot to look back on the city,” said Williams.

But the space still awaits a master tenant. With transit access and proximity to the redeveloping North Lot of CenturyLink Field, most of the leasable space on two upper levels is programmed for office use.

The city is angling for cafes and coffee shops in spaces out front. Just outside the doors, plenty of room has been reserved for tables and chairs on the granite pebbles, but there's also room for noon concerts or market stalls.

History is secure, but the story of King Street Station's upper levels is still being written.

“What a transformation! A jewel for Pioneer Square and Seattle.

“Everyone should stop to admire the spectacular ceiling plane, the floor plane and then everything in between.

“The care taken in renewing and preserving the details, and the team’s commitment to preservation and rehabilitation befits a project that’s located in the birthplace of historic preservation.”