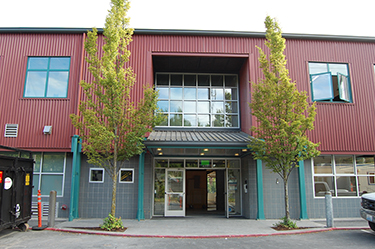 Photos by Lynn Porter [enlarge]
Seventeen Meters LLC bought the property for $11.6 million. A renovation by Gensler and Schuchart Construction added 15,000 square feet in two mezzanines for a total of 53,000 square feet. 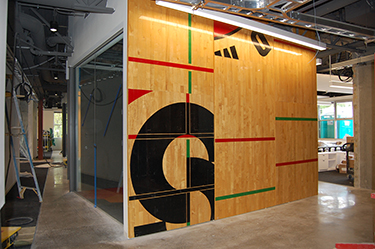 [enlarge]
Wood from the basketball court was used for walls and flooring because Tableau wanted to retain the building’s character.

In September, Tableau Software will move its development team into a three-story Fremont building that until recently was a gym.

The former Sound Mind & Body Gym at 437 N. 34th St. can accommodate about 400 workers, but initially Tableau employees will fill only about two-thirds of the building.

The revamp lets the rapidly growing Seattle-based company continue to expand in the quirky, amenity-rich neighborhood where it also has its headquarters. Tableau makes data visualization software and was founded in 2003.

Brett Thompson, vice president of human resources, said Fremont matches the company's culture. With low-rise, not super-corporate buildings, as well as the annual Solstice Parade and a creative, artistic vibe, he said, “It just kind of feels like us.”

But with office space at a premium in Fremont, Thompson said it made sense to put the gym — originally designed as an office building — back to its original use.

CBRE's latest quarterly report shows the canal submarket, which covers Fremont and part of northern Queen Anne, is the city's tightest, with a 2.5 percent vacancy.

The company has several offices in Fremont, and its headquarters is walking distance from the 437 N. 34th St. building. It also has U.S. offices in Kirkland, Menlo Park and Austin, and overseas in London, Dublin, Frankfurt, Singapore, Tokyo and Sydney.

Thompson said Tableau wants to remain a Fremont company. It is looking for space there and on the Eastside, but is careful about leasing.

“We plan to grow aggressively for years to come and we don't want to take too much space and pay for space we're not using,” he said. “We also don't want to run out of space.”

The company has no plans to build space, he said, but if the right opportunity came along it would evaluate that option.

Image courtesy of Gensler [enlarge]
A two-story atrium between the mezzanines lets people see what’s happening on other floors.

The old gym overlooks the Ship Canal and is adjacent to Burke Gilman Trail. The location and design are intended to help retain and recruit workers in a tight tech market.

“Our people are our most important asset and resource,” said Thompson, who is responsible for human resources, recruiting and workplace operations. “We want to make them happy with the environment that they're in. ... And we're hiring rapidly.”

Being in a lively neighborhood is important because, unlike some other tech firms, Tableau doesn't want to always keep people in the “company ecosystem,” Thompson said. People are encouraged to go to local restaurants and coffee shops — to recharge.

Seventeen Meters LLC bought the gym building this year for $11.6 million. The LLC is run by Mike Hess of First Western Development Services and Mark Grey of Stephen C. Grey & Associates. Tableau declined to disclose the lease terms or the renovation cost.

The building was constructed in 1997 for offices, but has only been a gym.

Chad Yoshinobu, principal in charge of the project with Gensler, said the renovation respects the old use. The structure is exposed and new systems mimic the original industrial nature, Yoshinobu said. Wood from the basketball court was used for walls and flooring in meeting spaces.

“We wanted to retain the character of the building as much as possible,” he said.

The design, he said, was driven by a survey Gensler did of Tableau workers as well as an earlier survey the design firm did of tech firms nationally. The national survey was used to help solve challenges noted by Tableau workers.

In the national survey, people said open offices foster collaboration, but are too distracting for some people to work effectively. They also said people perform better if they have different types of spaces to work in.

In Tableau's new space, a two-story atrium was installed between the mezzanines so people can see what's happening on other floors, said Yoshinobu. The atrium offers enclosed spaces for “loud” functions, such as meetings. Private offices and team rooms extend out from the atrium to buffer the “loud” activities and make work stations quieter, Yoshinobu said. Even in the open office area there are collaboration rooms.

“The people who work in this building are developers,” said Yoshinobu. “When developers are writing code they can't be distracted, but collaboration is really important to Tableau.”

There are lots of choices for employees looking for spaces to work. There are kitchens on every floor where they can grab a bite and hold informal meetings. There are also nooks in hallways, and lounges where teams can gather.

This choice aspect “goes from macro all the way down to the micro,” such as desks that have adjustable heights, said Yoshinobu.

Most spaces in the building also have video conference technology designed by Tableau, because the company does a lot of teleconferencing between global offices.

The old gym's lockers and showers were retained, but updated, and bike storage was added because many Tableau employees bike to work.

Thompson said the design is great, but functional — with lots of light, high ceilings, views of the water and useful spaces.

Tableau used extensive employee input and Gensler's experience to get what it wanted, while “not being ridiculous about the cost,” he said.

Lots of businesses are concerned with the impression that a lobby or conference room makes on customers, he said, but none of that matters if an employee's work space is not functional.