In a forest of new high rises, there's a little Sugar Mountain 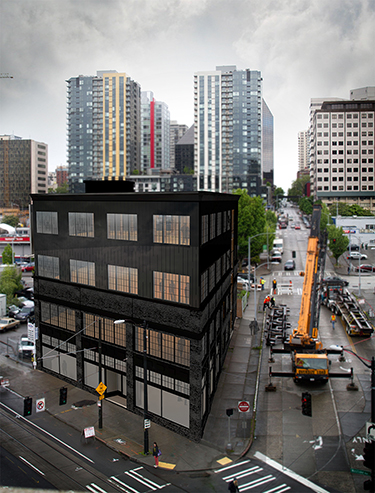 The company behind Beecher's Handmade Cheese and the pig-shaped Maximus/Minimus food truck is now building a headquarters for its burgeoning culinary empire.

Sugar Mountain hired Mallet Construction to renovate a former auto shop and office building at 2121 Westlake Ave. in the Denny Triangle and add two floors to the structure. Mallet will design and build the project.

The two-story, 17,000-square-foot building was built in 1925, according to King County records.

An entity related to Sugar Mountain purchased the property in 2012 for $4.4 million.

The company's website says Sugar Mountain takes its name from a Neil Young song. Owner Kurt Beecher Dammeier writes that not only is “Sugar Mountain” one of his favorite songs, “but I thought it only appropriate to name the company after a place of endless opportunity where anything is possible.”

Dammeier did not return a call on Friday seeking comment.

The company's other businesses include Bennett's, Pasta & Co., Liam's, Sugar Mountain Bake Shop, and Fraunhofer Meat and Fish. Its current headquarters is in the Broderick Building, across the street from Pike Place Market.

In the Westlake building, Sugar Mountain will operate a two-level restaurant space called Max's that will specialize in smoked meats. The upper level will be a roadhouse-style barbecue joint and the lower level will be a steakhouse.

There could also be a back-of-the-house bakery space, but no retail component.

Eric Hentz, owner of Mallet, is the designer-builder behind a number of well-known Seattle haunts such as Ace Hotel, Le Pichet and Rudy's Barbershop stores.

Mallet's industrial-chic style seems like a natural fit for the old auto-row building.

“We tried to keep as much of the charm of the existing structure as possible,” Hentz said.

One big change, he said, will be a new glass curtain wall that will reveal a “loose, fabricated stair going up through the volume” of the building, lending a bit of visual interest.

The neighborhood around the building is awash in new development, including a pair of Vulcan Real Estate's large mixed-use complexes — 2200 and 2201 Westlake — across the street.

“With every single thing going into that area, there's not a lot of adaptive reuse,” Hentz said. The Sugar Mountain building “works out as a pretty interesting element in that neighborhood.”