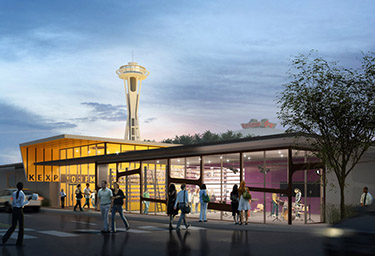 Public radio station KEXP said it will begin construction next month on its new home at Seattle Center.

The station will hold a groundbreaking ceremony at 10 a.m. Jan. 28.

The $15 million project will allow the station to relocate to the center's Upper Northwest Rooms, a 28,000-square-foot event space at First Avenue North and Republican Street, north of KeyArena.

The new station will have a music library twice the size of the one in the existing station, and have listening booths for DJs, work areas for assistants and volunteers, and digital resources for music research.

The lounge for touring musicians will have showers, laundry facilities, work stations and a place to nap.

Unlike the old KEXP, new station will be open to the public.

A 4,500-square-foot lobby will have space for performances, dance parties, classes and lectures. Visitors will also be able to watch DJs at work in their booth.

A separate live performance area will hold up to 75 guests.

KEXP has been housed there since 2001, after moving from the University of Washington campus, where it was called KCMU.

KEXP will move into the new digs late next year and open to the public in the second quarter of 2016.

The station has raised $7.7 million for the project so far, according to its website.