What Seattle can learn about growth from San Francisco, Kansas City, Nairobi 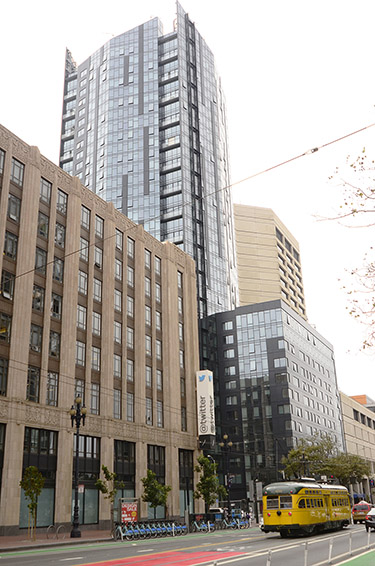 Photo by Stefan Kaiser [enlarge]
Across from Twitter’s headquarters in San Francisco is an apartment building where rents on a one-bedroom unit start at $3,900.

Stefan Kaiser, a 24-year-old associate with Encore Architects in Seattle, has some ideas about how to make tech cities more equitable.

He did research on the topic thanks to an AIA Seattle travel scholarship, which allowed him to spend time last year in San Francisco, Kansas City and Nairobi.

Kaiser moved to Seattle in 2013 with his fiancee after earning a bachelor of architecture degree from Syracuse University in New York. He worked at DLR Group and moved to Encore in 2014 when it expanded.

Even before he got the scholarship, Kaiser said he had been thinking about what tech firms want from architecture. He also started contemplating how these firms affect the communities around them, and it was about this time that protesters in San Francisco were objecting to private shuttles run by tech firms using city bus stops.

Seeing the pace at which new projects are filling up Seattle's South Lake Union made him think the topic was worth exploring, he said, so he applied for the scholarship.

Kaiser said Seattle is growing so quickly that it needs to start thinking like a world-class city — a tech hub that will continue to attract lots of new people. The city needs to plan so that growth happens in a sustainable way, he said.

You can see an exhibit based on Kaiser's research at AIA Seattle's office at 1911 First Ave. The exhibit is titled “Innovation Hub (+)” and it runs through April 30.

Kaiser answered some questions from the DJC about his research:

A. The growth of technology companies has been changing some cities for decades, and has just started altering others. Twitter's 2012 relocation from Silicon Valley to downtown San Francisco is part of the tech community's evolution. Since the 1950s suburban office parks at Stanford University, tech companies continue to shape the demographic and physical development of the Bay Area.

In Kenya, access to the Internet from mobile phones has expanded exponentially since 2005. Coupled with the introduction of mobile money transfer software M-Pesa, the country is now one of the fastest growing markets in Africa, drawing tech companies like Microsoft and Google to set up offices there. Kenya is so committed to its technology sector that it is building an entire city from the ground up — called Konza Tech City 40 miles south of Nairobi — that will attract international business and be fully operational by 2030. At the same time, grassroots communities with co-working spaces like iHub in Nairobi are already providing a place with free Internet access where entrepreneurs can work on their apps and meet new people.

Seattle and Kansas City are somewhere in between, both trying to balance social, urban and economic development with the interests of their citizens and tech companies that are relocating downtown.

Q. What are those cities doing to be more equitable?

Regional transit in San Francisco promotes equity and has allowed the city to grow. Think about being able to take the light rail from Puyallup to Ballard in 37 minutes. That's what BART does in the Bay Area — it helps people travel to and from work and expands their options for where to live.

Kansas City is also investing in rail infrastructure with a streetcar line, but the local government needs to incentivize construction of housing, office space and neighborhood necessities like grocery stores on vacant parking lots downtown. Instead of building outward and creating new subdivisions, Kansas City needs to revitalize its downtown.

The Kenyan government is investing heavily in infrastructure to bring Internet to every village and town, which is a huge leap forward in promoting social equality by giving people easier access to information and communication services as well as offering entrepreneurial opportunities.

Q. What can Seattle learn from them?

A. The rapid construction of housing in Seattle is so far keeping pace with demand, which already puts us in a much better position than San Francisco. Both cities have limited land area and San Francisco has seen that if you don't build up, real estate values skyrocket. Apartments and condos being built in Seattle now will help curb inflated real estate prices.

Seattle struggles with building infrastructure and does not have an adequate public transportation network. In 10 years there will be at least 100,000 more people here, so Seattle needs to start planning for more public transit now. It must expand bus service, light rail and physically separated, safer bike lanes — all elements contributing to San Francisco's effective public transit system.

Q. How are regular folks affected by tech firms in cities?

The breakneck speed at which Seattle's tech companies are growing is causing housing costs and traffic to increase. In a few years that could mean high-cost, homogeneous neighborhoods — like some in San Francisco where only tech employees can afford to live and work. For example, the Crescent Heights luxury apartment building across the street from Twitter has one-bedroom units starting at $3,900 a month, which is too expensive for most people.

Sometimes though, tech can be great for a community. ThinkBIG and SprintAccelerator are tech companies that are remodeling historic buildings in downtown Kansas City for their offices, making for a more walkable, lively urban core.

In Seattle, the vacant Enterprise Rent-A-Car lot on Westlake will be transformed into a public park to help Amazon's new office projects achieve their land use code-required “green factor.”

Q. You say density and transit-oriented development make for more equitable cities. Why?

Dense cities provide more housing and help protect natural resources. People living in smaller apartments, walking and taking public transit means fewer vehicles, less carbon emissions and less building on undeveloped land. It will, for instance, protect the county parks and natural areas around Sammamish and Issaquah. Consolidated shopping districts mean people can get groceries and other goods without having to drive.

In Kansas City's Power and Light District there are lots of apartments in walking distance to financial and city government offices, music venues, BBQ restaurants and bars. A monthly art gallery tour encourages people to meet their neighbors and patronize the artist community as well. Plans are under way to build more housing and public parks on vacant tracts downtown.

Q. How can we create housing in downtown Seattle that's affordable?

A. A healthy housing market should provide supportive housing for low-income households and affordable rentals for the middle class and seniors. Seattle can use public funds appropriated with taxes to build housing for low-income households or the city can work with real estate developers to require inclusion of a certain number of affordable units in their market-rate projects. Developers can also elect to pay a fee that goes directly to a housing fund so low-income apartments can be built in another location. Both methods increase the supply of low- and moderate-income housing.

Regardless, we must spend money on affordable housing even while working to add enough market-rate housing to drive down prices. Establishing the proper fee to charge developers is tricky: If fees are too low, cities lose out on public benefits they otherwise might have received like new parks and community facilities. Too high, and housing becomes infeasible to build.

Amazon's Denny Triangle towers paid a $12 million fee per tower for the ability to construct taller office buildings. That is $36 million going to low-income housing construction.