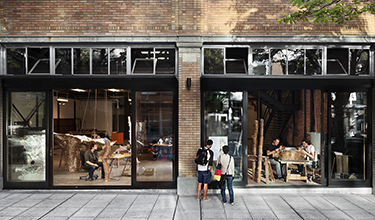 Crowds gather outside the window of a gallery called MadArt to watch John Grade fashion a 40-foot-long sculpture of a tree made from tiny blocks of wood, and at least 2,000 people have come inside to see the exhibit in the last two months.

MadArt is not on Capitol Hill. Grade is working in South Lake Union, a rapidly growing area known for new buildings filled with tech workers and a bevy of new apartments to house them.

Some business owners and creative types are trying to foster an arts culture in SLU, which has few galleries but swarms of people — many of whom are new to the city.

“We're working on it,” said Dena Lee, co-chair of SLU Art Walk, an organization formed last year to promote art in the neighborhood. “I think people are overwhelmed by the tall buildings and the shiny new windows and steel frames and all the new construction that people don't think about this being an art community.”

The group is co-chaired by Andrea Florissi, owner of Caffe Torino in SLU. An art walk is scheduled for May 7 from 5 to 7 p.m. and will feature photography at Glazer's Camera, a window display at Mirabella Seattle retirement community, entrants in an art contest sponsored by LungForce at Vulcan Real Estate's Discovery Center, a presentation by the Institute for Systems Biology on the relationship between art and science, and work of students at Cornish College of the Arts, which is located just outside SLU.

Lee said her group wants to get others involved in its events, including the Museum of History & Industry and the School of Visual Concepts, which offers courses such as printmaking and graphic design.

SLU Art Walk also hopes to hire artists to paint signal boxes on streets and wrap trees in a creative way, among other projects.

The May 7 art walk is sponsored by Amazon.com, Vulcan, Whole Foods Market and City Arts Magazine. Details are on Facebook under SouthLakeUnionArtWalk.

Shunpike, a Seattle nonprofit artist organization, is participating in it and will have art installations through July 20 in storefronts in the Amazon.com's SLU campus. For a map of them, go to http://artmap.shunpike.org/.

The installations are sponsored by Amazon and range from dioramas of fairy tales to an exploration of the ways we try to frame the past. Jennifer Barry, Shunpike executive director, said they fill shallow display windows that shield Amazon workers inside from the public.

Amazon likes the art because it beautifies the area and give employees interesting things to look at as they walk outside, Barry said.

Barry said South Lake Union “has been a little soulless. It has been a little cold, but it is changing. I think there are people interested in humanizing it and making it an interesting destination point in and of itself.”

Lee said “art helps soften the edges and humanizes a neighborhood” and encourages people to wander in search of more surprises that might be hidden “in little pockets of the big buildings.”

SLU's demographics are different, Lee said, than Capitol Hill's, which has long been known for its arts scene and funky old buildings. The SLU people are younger, probably work in tech and need something interesting to help them break out of their “little boxes,” she said.

South Lake Union has seen extensive development in the last decade. The boom, largely propelled by Vulcan, has brought a forest of new offices, apartments, condos and retail to a formerly light industrial area.

SLU may not have a thriving arts culture, but it's got good public art in the new projects — which is at least “a good start,” as Tim Detweiler puts it.

Detweiler is director of MadArt. The Seattle-based organization works with artists to create site-specific work that people can connect to unexpectedly, like while walking down a street.

MadArt has worked in various Seattle neighborhoods. It recently opened a space in SLU at 325 Westlake Ave. N. in a mixed-use apartment building developed by MadArt founder Alison Milliman and her husband, Glen Milliman.

Detweiler said the neighborhood has lots of bars, restaurants, people and apartments, but few mom-and-pop shops and boutiques. He envisions farmers markets and plazas being used for musical and cultural events, promoted by arts organizations and businesses.

“There's a lot of young people coming into town from all over the world that might like to have some of those things in their neighborhood,” he said. “You have a built-in audience.”

Art already seems to have a fan base in the neighborhood as evidenced by the crowds that gather, mostly at lunch and dinner, to watch Grade and his assistants work on “Middle Fork.” The sculpture will go to the Smithsonian's Renwick Gallery in Washington, D.C., later this year.

More than 150 people have volunteered to help glue the wood pieces that make up the sculpture.

“That's kind of a nice sign that people are interested and ready to get involved,” Detweiler said.