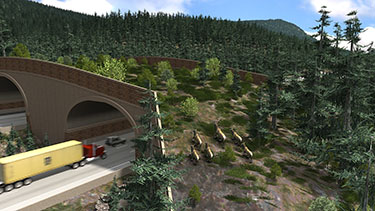 Image from WSDOT [enlarge]
Wildlife will be able to cross above vehicles on this overpass near Price Creek Rest Area.

It's getting busy on Interstate 90 over Snoqualmie Pass. Busy with construction, that is, not just traffic.

Crews are back at the pass for another season of widening and improving the freeway between Hyak and Keechelus Dam for the state Department of Transportation.

The next segment of work covers about two miles and includes the state's first wildlife overpass. It is expected to be awarded soon.

Six bids were opened April 1 and Guy F. Atkinson Construction was the lowest: $72.78 million. The engineer's estimate was $68.58 million.

Bob Adams, vice president at Atkinson, said this segment will connect to a three-mile stretch his firm has been working on since 2011.

Adams said this state has several wildlife crossings that go under bridges, including one at Gold Creek in the Hyak area that was built by Max J. Kuney Co. two years ago. He called the overpass near Price Creek Rest Area a “gateway structure” for wild animals around Snoqualmie Pass.

Adams said his crews have seen a handful of dead animals over the four years they have worked at the pass. The wildlife overpass should reduce the casualties as well as damage to cars, he said.

On April 1, WSDOT also opened bids for a contract to build fencing that will funnel animals into the Gold Creek undercrossing. Northwest Fence Co. of Spokane was apparent low bidder at $1.36 million. Atkinson was the only other bidder.

A spokeswoman from WSDOT said both contracts are pending award.

Construction on the two-mile segment is expected to begin in June.

Last year, Atkinson removed the snow shed that had protected the westbound lanes since 1950. The shed is being replaced by two tall bridges that will let avalanches pass below them.

Adams said the warm winter allowed crews to continue some work into December and finish the substructure for the first avalanche bridge.

Crews returned to the pass in late March and should have the first tall bridge finished this season.

Construction at the pass typically runs from April to October.

Adams said they plan to finish approach work on the first bridge next spring and switch traffic onto it during the 2016 construction season. Crews would then start the second bridge and have it open by the end of the 2018 season.

Adams said the warm winter weather was good for construction, but the team still was concerned that without the snow shed there might be more road closures due to avalanches and snow removal. As it turned out, the lack of precipitation meant no road closures were needed for snow control.

The current lack of snow pack and predictions of a dry summer ahead may pose problems for Adams and his crews. Adams said fire danger will be a concern and Atkinson has set three fire safety levels for its crews: level 1, take precautions; level 2, stay out of some areas; and level 3, no work in the forest.

WSDOT ultimately wants to widen and improve 15 miles of I-90 between Hyak and Easton. Two future phases will cover the remaining 8.5 miles at a cost of about $390 million for design and construction.

WSDOT has no funding or schedule for that work.

The new six-lane freeway is designed to last 50 years. A video of the project is below.