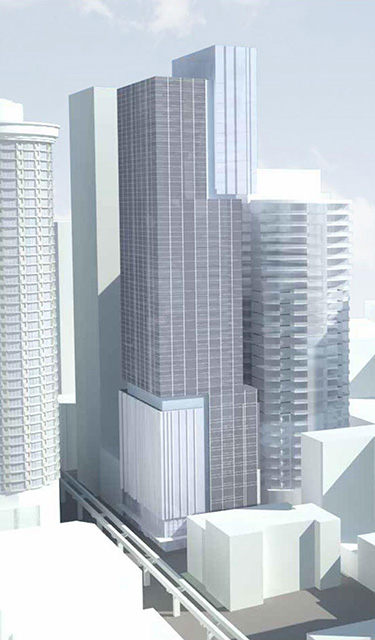 Douglaston Development is designing its 45-story Seattle tower to appeal to the next generation of residents and tourists.

The latest filing with the city shows the tower at 1933 Fifth Ave. will have 394 apartments, 151 hotel rooms and 326 parking spaces.

The developer's preferred design is called “jewel.” The middle section of the structure would have a setback to create more space between it and the nearby Escala condo tower.

Perkins + Will is the architect.

Stanford Hotels Corp. is planning a 50-story tower — a hotel topped by condos and apartments — that would share the half-block property.

Over the past seven years, the website says, Douglaston has completed projects valued at $1.5 billion including 3,000 apartments, 2 million square feet of retail and 500 hotel rooms in New York City as well as senior housing in the Southwest.

One major project is in the Williamsburg neighborhood of Brooklyn: a 1 million-square-foot, mixed-use complex called The Edge, on a seven-acre site along the East River. The Edge has 565 condos in two towers, 347 affordable units in two mid-rises, as well as open space, a public esplanade and a water taxi pier.