Tall performance in Portland is a hard act to follow 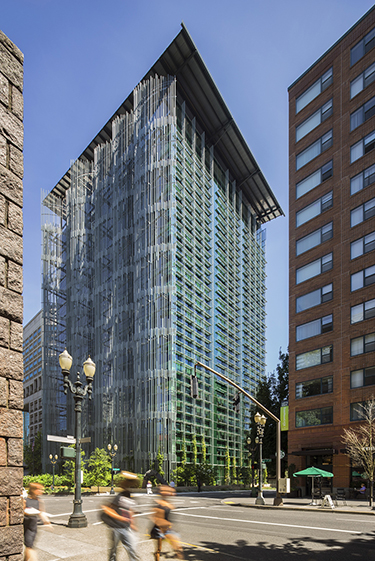 Photos by Nic Lehoux [enlarge]
Edith Green-Wendell Wyatt Federal Building is a self-contained urban habitat, generating its own energy and facing each direction of the compass with a different wall system to make the most of solar energy and fend off heat. It’s topped with a dramatic, sloping array of photovoltaic panels. 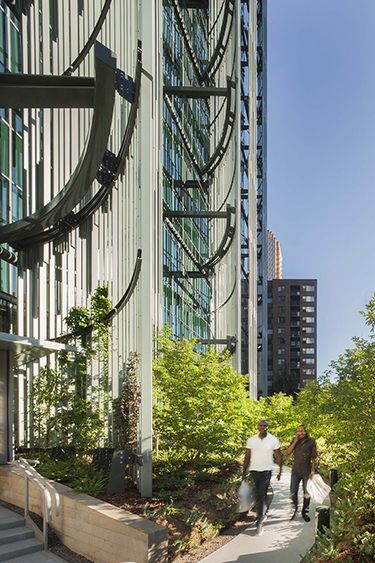 [enlarge]
Office buildings are hard to keep cool. Along the west wall, a series of full-height curving fins mitigate the sun, with artful screening elements built in. Plants are being trained to climb the structure. 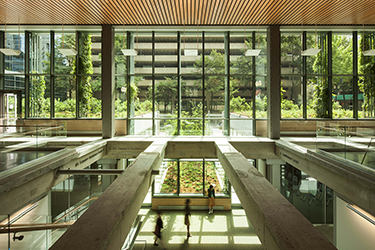 [enlarge]
The basement level has been opened up by cutting through the original floorplate to bring in light and views. Two new entrances, at different levels, angle in from either side of the building.

Seattle may be in the middle of the largest and best-documented building boom the city has ever known. At last count, there are 48 buildings under construction downtown. That's enough to fill in the skyline, changing the look and character of the city far into the future. Will they be good?

His firm, Cutler Anderson Architects, was the design architect for the Edith Green-Wendell Wyatt Federal Building in Portland. (SERA Architects, a Portland firm, is the executive architect for the modernization.) This spring, Cutler traveled to Chicago, where the tower was recognized as the “Best Tall Building in the Americas” by the Council on Tall Buildings and Urban Habitat, based at the Illinois Institute of Technology.

The 525,000-square-foot, $139 million EGWWFB occupies a city block in Portland's government district, and it joined several federal office structures there in 2013. At 18 stories, it's not even the tallest building in that city. But it's probably the hardest working, earning its place on the skyline every day.

The building is now fully commissioned and designated LEED platinum with energy use per square foot that is less than half the average office building. It could vie for the most energy efficient tall office building in the world, proving that the U.S. General Services Administration, the client for the project, takes sustainable design seriously.

As you might imagine, Cutler put a lot of thought into the Portland tower. The stakes were literally very high. “We wanted to do a building that is so physically representative of our sustainable future that the city of Portland would be proud of it,” he said.

Modernizing around the bones

He thinks of tall buildings as a kind of extreme architecture, contending with the deep forces of gravity and the weather in a big way. That's what the Edith Green-Wendell Wyatt Federal Building is designed around, he said: “To ignore those, so that you can have a shape you like or a form you like, can be very shallow.”

The EGWWFB is a kind of self-contained urban habitat, generating power and collecting water for flushing toilets and watering plants. It's topped with a dramatic, sloping array of photovoltaic panels. It generates its own energy with gravity itself (power is produced as elevators descend) and it faces each direction of the compass with a different wall system designed to make the most of solar energy.

The building itself is recycled. Modernization, in this case, means that the EGWWFB is built around the bones of the 1974 former federal office building, a concrete structure with very outdated and inefficient systems. One of the first observations Jim Cutler remembers making about it is that when you take away the thick concrete skin, you've already removed most of the seismic load, helping the redesigned building to exceed current standards.

Now it's opened to light and air as never before, making it much more pleasant and sustainable to occupy. The new wall system nets additional space at the edges of every floor. The massive mechanical system, with its forced-air fans and vents, has been replaced with a quiet radiant heating and cooling system with air circulating from the outside. Taking out the forced air system yielded an entire floor of usable space for the GSA portfolio. The EGWWFB saves hundreds of thousands of dollars per year in energy consumption over the former building.

The new envelope itself is a major part of the mechanical system, regulating heat and light in a way that makes the building very energy efficient. Each of the four sides is unique, presenting a different face to the city and a specialized wall system to the elements.

The north side is a conventional curtain wall, a smooth expanse of glass and steel. The south and east walls have differing arrangements of vertical shades and horizontal reflective and shading panels, with two horizontal louvers per floor.

The west wall goes literally all out. A series of full-height curving fins mitigate heat gain, with artful screening elements built in. Plants are being trained to climb the structure, and are expected to reach the third floor before they stop.

A windowless basement level has been opened up by cutting through the original heavy floorplate to bring in light and views. The resulting two-story space has two new entrances, at two levels, on either side of the building.

Some rivalries are worth the civic energy they generate. For pure performance, Portland's newest federal building is worth beating, if Seattle should be so lucky.

Clair Enlow can be reached by e-mail at clair@clairenlow.com.
﻿