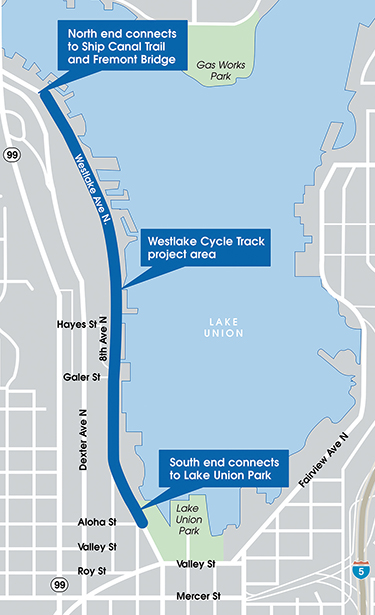 Seattle Department of Transportation is getting set to build a $3.6 million cycle track along Westlake Avenue North. The 1.2-mile track will run from South Lake Union Park to the east end of the Ship Canal Trail, near the Fremont Bridge.

SDOT is seeking construction bids for the project, which involves building the two-way track, sidewalks, curbs, drainage, a traffic signal and lighting for pedestrians.

SDOT’s website shows construction would be done in the first quarter of 2016.

For more information, see the public notice in the July 27 DJC.

Westlake is a busy four-lane arterial that sees 25,000 vehicles a day, according to the city. Cyclists tend to avoid the street and ride instead through the parking lots that parallel Westlake, risking collisions with vehicles.

The cycle track will run along the east side of the parking areas, adjacent to the existing sidewalk. SDOT says the path will minimize the number of vehicles crossing the cycle track, and offer a scenic and intuitive route for riders that is distinct from the sidewalk and preserves as much parking as possible.

Dexter Avenue North, a block to the west, runs parallel to Westlake and already has bike lanes. But SDOT says that the Westlake route will provide a better experience for riders by offering grade-separated lanes that people of all ages and abilities can use.

Westlake also provides a direct route between the Fremont Bridge and South Lake Union. The new lanes will strengthen the Cheshiahud loop trail around Lake Union.

The city’s Bicycle Master Plan, last updated in March, calls for building more than 35 miles of protected bicycle lanes and more than 50 miles of neighborhood greenways by 2019.

Those goals could be trumped by a $930 million, nine-year transportation levy that will appear on Seattle ballots in November. This levy seeks funding for 50 miles of new protected bike lanes and 60 miles of greenways.