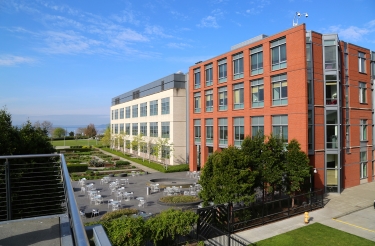 Bohlin Cywinski Jackson will design Expedia's new headquarters on a 40-acre site along the Seattle waterfront.

Expedia announced earlier this year it will move from downtown Bellevue to the Amgen campus in Seattle by 2018. The online travel company bought the site in May for $228.9 million.

The campus today has 750,000 square feet. Expedia will convert the existing buildings, which are mostly lab space, into modern offices.

Expedia CFO Mark Okerstrom said at a press conference in April the renovation will be a big one, and could take 18 to 24 months. He said Expedia will build 200,000 square feet of new office space on the campus.

BCJ Founding Principal Peter Bohlin said in a statement that plans for the campus are still coming together, but the end result will be “an innovative balance of new and existing buildings that reflects the spirit of Expedia as well as the natural beauty of Seattle and the Pacific Northwest.”

BCJ designed Seattle City Hall with Bassetti Architects and the Ballard branch of the Seattle Public Library. It also designed Pixar's headquarters in Emeryville, California, as well as numerous Apple stores and a 100,000-square-foot headquarters in San Francisco for Square.

“It was important to Expedia to choose an architect that could help us build an iconic headquarters befitting the global technology company we are,” Dara Khosrowshahi, Expedia's CEO, said in a statement. “BCJ really stood out as a firm that would bring our vision to life with a campus that highlights who we are as a work-hard, play-hard global leader in technology with a passion for travel and deep roots in the Pacific Northwest.”