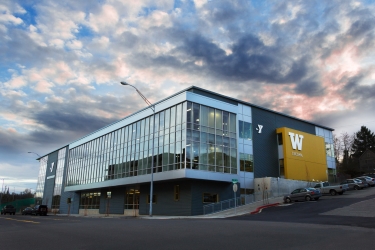 The University Y Student Center near the University of Washington Tacoma campus won a 2015 national award from Design-Build Institute of America in the educational facilities category.

Mortenson Construction was the general contractor and McGranahan Architects designed the $22 million, 70,238-square-foot center, which opened in January at 1710 Market St.

Mortenson said in a press release that the design-build project was developed by UW Tacoma and YMCA of Pierce & Kitsap Counties. It serves as a student center and YMCA gym for people downtown. The university owned the site prior to construction.

Mortenson said the project was completed four months ahead of schedule.

It has assembly and office space, locker rooms, strength-training equipment, cardio and track components, a climbing wall and a gym with a basketball court.

Wood from demolition of the Longshoremen's Hall on the site was reused in a wall display and plaque memorializing the hall.

UW Tacoma student fees financed much of the project and Mortenson said students offered a lot of input. When they asked for a larger climbing wall than what was planned, the team provided one — at no extra cost — by incorporating it into a required shear wall.

The University Y Student Center will now vie for project of the year at the DBIA conference in November in Denver.