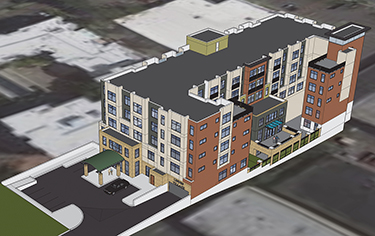 Rendering courtesy of Innova Architects [enlarge]
Linden Village in Bitter Lake will be owned by Zenith, Village Concepts and a holding company of investors in the EB-5 visa program.

When Anthony Hemstad of Zenith Capital looks out the window of his Seattle office, he sees a lot of construction but most of it is not the kind of projects his firm is doing.

“I am in downtown looking out at all the cranes, and that's not for senior housing,” he said. “Generally that's for Amazon.”

Zenith is not developing for 20- and 30-something techies. It plans to start construction late next year on a senior community at 13524 Linden Ave. N. in the Bitter Lake neighborhood. Construction will take a year.

Innova Architects is designing the complex, which is called Linden Village. It will have 79 assisted-living studios and one- and two-bedroom units. A separate wing will house 21 one- and two-bed memory care units. A rooftop deck and entertainment center are planned.

Linden Village will be owned by Zenith, Village Concepts and a holding company made up of investors in the EB-5 immigrant investor visa program. Zenith arranged the financing.

Hemstad said his firm is working on two other assisted-living/memory care projects in King County, and has others in development in Oregon, California and the Midwest. It is looking for sites in Washington. He said some of the projects will be financed by EB-5 and foreign equity investors.

Hemstad was formerly the city manager of Maple Valley, president/CEO of World Trade Center Tacoma and worked in international business for about 15 years. He holds a master's in business administration from the University of Chicago.

He said over 10,000 baby boomers are retiring daily in the U.S., which creates an increasing need for assisted-living and memory care facilities. Occupancy in such projects is about 92 percent nationwide, and he said occupancy in Seattle is comparable.

Linden Village prices haven't been set, but will be market rate, and include rent, meal plans, medication management, room cleaning and activities. For memory care, where residents tend to have diseases such as Parkinson's and Alzheimer's, more intensive services are provided.

Zenith was established in 2002. Hemstad said it has arranged financing for some Village Concepts and ABHOW/Seniority projects, among other groups.

Village Concepts provides property management and consulting services for residential and assisted-living communities. It owns or operates 15 senior communities in Washington with more than 1,400 residents.