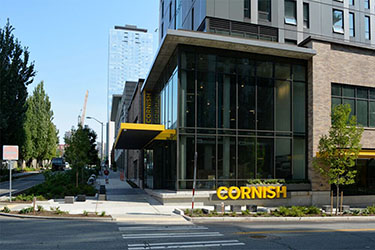 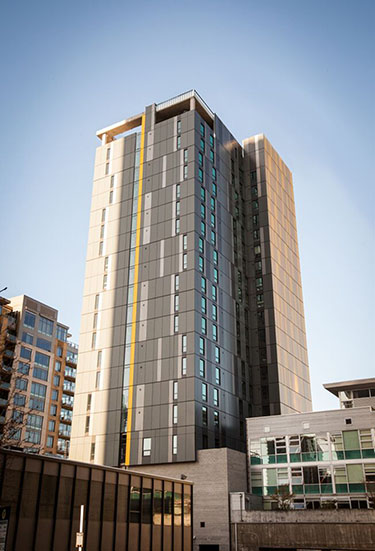 Photo courtesy of Ankrom Moisan Architects [enlarge]
The 20th floor will have a student lounge, practice rooms, studios and a garden -- with views all around.

It sure beats living in a motel.

Next month a new 20-story residence hall and academic building at 2025 Terry Ave. in Seattle will house students from Cornish College of the Arts, which had used nearby motels for dorms.

The 156,000-square-foot, 438-bed building is called Cornish Commons and it's on the college's main campus in the Denny Triangle neighborhood. It opens Aug. 27, and students move in Sept. 2.

Rosemary Jones, director of communications for Cornish, said students are sure to spend lots of time on the top floor. It has a glass-enclosed student lounge with double-height windows, a kitchen, cushy chairs, a fitness room, laundry, practice rooms for performers, studio art space, a garden, and views of Lake Union, the Space Needle and Puget Sound.

“I don't know if we'll ever get them off the 20th floor,” quipped Jones. “This is much much nicer than anything they've had before.”

The residence hall will be on floors four through 19. Rooms will have either one, two or three beds, as well as a bathtub in the bathroom so dancers and other performers can soak.

Each floor will have a lounge and kitchenette, and some will have dry-erase walls for students to do impromptu drawing.

Jones said rents per academic year will range from $7,160 for a triple to $11,700 for a single with a kitchenette. Meals are not included, but the college cafeteria is across the street in the Main Campus Center.

Cornish Commons has more dorm rooms than the college needs now, so it is leasing four floors to nearby City University of Seattle. Jones said the residence hall is fully leased.

Cornish is a private nonprofit college with about 775 students. In 2003, it moved the main campus from Capitol Hill to Denny Triangle, where it bought and renovated a number of buildings. Jones said Cornish now leases or owns 12 buildings, most on the main campus.

She said Cornish Commons will become the college's “living room,” with a fireside lounge and student life and counseling offices on the first floor for students who live both on and off campus. Above that will be movement studios, conference rooms, practice space and art studios.

Cornish Commons gives the college a more visible presence, she said, and helps consolidate major operations around Lenora Street and Terry Avenue, where the dorm and Main Campus Center are located.

“What this space does is very clearly place our students in the center of all the activity on campus 24 hours a day,” she said.

Capstone Development Partners of Birmingham, Alabama, said it developed Cornish Commons at a cost of $49.6 million, excluding the land.

A joint venture of Capstone and Harrison Street Real Estate Capital, a Chicago private equity fund, lease the site from the college and own the building.

Cornish manages student services, and Capstone On-Campus Management, a Capstone company, manages the building. When the ground lease expires in 2056, ownership of the building will revert to the college.

Capstone Development Partners has 25 years of experience developing student housing for colleges and universities. It has partnered with over 60 institutions to develop housing on and near campuses, with more than 42,000 beds.

Michael Leonczyk, director of finance with the company, said it has been doing partnerships with colleges and universities since the mid 1990s. He said as resources tighten it's a good way for schools to build residence halls, dining facilities and parking.

Jones said Cornish guarantees Capstone On Campus Management a certain number of residents at Cornish Commons, and the college gets a percentage of the lease money beyond that.

Cornish also leases back the first two floors of the building from Capstone.

“It's a very beneficial financial model for both parties. It takes away the risk for both sides,” said Jones, who called Capstone an “excellent partner.”

Jones said Cornish was leasing from Clise Properties two former Denny Triangle motels for student housing, but Clise has other plans for those properties. The college, which had long-term plans to build student housing, voluntarily ended its lease early.

Cornish sold some properties in the area that were not central to its campus, and Capstone provided the model to build the residence hall, Jones said.

“The timing just worked out perfectly for all parties,” she said, because of the pace of development in the Denny Triangle. “Look how that area has changed from 2003 to 2015.”