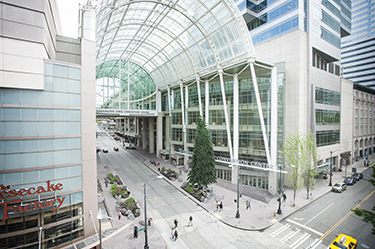 Image courtesy of ZGF Architects [enlarge]
The streetscape on Pike will get lights, paving and planters to help create a campus-like feel.

The Washington State Convention Center is a major component of the Pike-Pine corridor between downtown and Capitol Hill.

Early next year the center's streetscape will get a new look. New paving, planters with Northwest vegetation, and other elements will be installed on Pike Street between Seventh and Ninth avenues to make the center look and feel more like a campus.

Colored LEDs will be installed on the large canopy over Pike that connects the main convention center to an expansion completed in 2001.

The tunnel on Eighth Avenue that runs under part of the center will be cleaned and get some new paint, and down-lighting will be added to illuminate the sidewalk. The goal is to improve sight-lines and make the tunnel more welcoming to pedestrians.

“We hope to kick off the revitalization of Pike-Pine with this project,” said Ed Barnes, the center's vice president of operations.

The center is seeking bids by Sept. 25 from contractors, according to a notice in the Aug. 19 DJC. The total project cost is estimated to be $3.5 million.

Work is slated to start Oct. 1 and end in late January, said Barnes.

ZGF Architects is the design architect, Couglin Porter Lundeen is the civil engineer, Mazzetti is the mechanical engineer, Sparling is the electrical engineer and FMS is the lighting consultant.

Barnes said center officials had a “fancier plan” that called for granite pavers and stairs leading to the convention center. But he said they decided on a more basic plan that uses cast-in-place concrete pavers with granite accents, and focuses more on landscaping and lighting.

He said the changes are in line with the Pike-Pine Renaissance plan that was commissioned by the Downtown Seattle Association.

The Seattle landscape architecture firm Gustafson Guthrie Nichol was design lead for the plan. It proposes design standards for a broad area — between First Avenue, Interstate 5, Union and Virginia streets — to make it more inviting to pedestrians and bicyclists. The estimated cost is between $27 million and $54 million.

According to the DSA, the last major upgrade in this area was almost two decades ago when Nordstrom moved and Pacific Place was built.

Barnes said convention center officials hope to encourage other building owners to do similar streetscaping that will tie the area together and give visitors and locals “a sense of place, from the market to Capitol Hill.”

He said adding LEDs to the canopy over Pike will allow team colors for the Seahawks, Mariners and Sounders to be displayed at night, as well as the colors of firms that rent space in the center.

Creating a campus environment will help link the convention center with the conference center across Pike Street, and eventually with the expansive addition WSCC is planning nearby, he said, and create a “destination.”