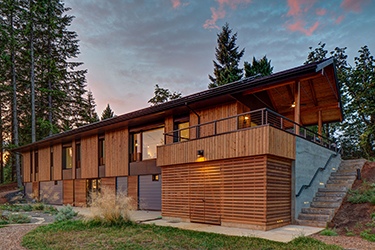 The 3,600-square-foot, four bedroom/four bathroom house was designed by Scott|Edwards Architecture. It was completed in 2013.

The Department of Energy has certified the house as a zero energy ready home. Such houses are so energy efficient they can produce as much or more energy than they consume on an annual basis if solar panels are added. In this case, solar panels were added to Pumpkin Ridge's roof.

Pumpkin Ridge's energy efficiency is due to a super insulated envelope, airtight construction with continuous fresh air ventilation, and being oriented so it gets sun when it needs it and shade otherwise.

Hammer & Hand said that without those Passive House strategies, the house could not become zero energy because too many solar panels would be required relative to the roof size. The more energy efficient your house is, the fewer solar panels you have to install.

The builder said the added cost of a Passive House is offset by utility bill savings.

Hammer & Hand has offices in Seattle and Portland.