Nordic Heritage Museum is getting $45M waterfront home in Ballard 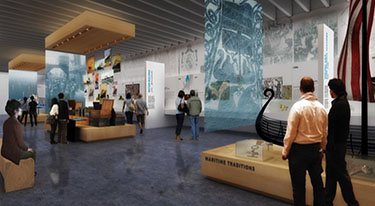 Renderings courtesy of Mithun [enlarge]
The new space will have more room for exhibitions and storing more than 65,000 items in the collection.
[enlarge]
The building is expected to open at the end of 2017 or early 2018.

The Nordic Heritage Museum has been located in an old school in Ballard for 35 years, but that's going to change.

Construction is slated to start next spring on a new three-story, 53,000-square-foot home for the museum at 2655 N.W. Market St., overlooking the working waterfront.

The $45 million building is expected to open at the end of 2017 or early 2018, said Jan Woldseth Colbrese, the museum's deputy director.

Seattle-based Mithun, which was founded by the son of a Norwegian immigrant, is the architect, landscape architect and interior designer.

The new space will have more room for exhibitions and storing more than 65,000 items in the collection. The collection includes items brought by Nordic immigrants from 1840 to 1920, as well as contemporary objects from their descendants.

The new building will also have better climate control and security so more traveling exhibitions from Nordic countries can be shown.

A 250-seat theater/auditorium with high quality acoustics, audio-visual equipment and lighting will be a big improvement over the school auditorium now used for programs, Colbrese said.

There will be a cafe and a cultural resource center with a research library where people can explore their genealogy. The center may also include an area where researchers can use hundreds of voice and video recordings of Nordic American immigrants and their descendents that the museum has produced over the years.

Colbrese said this is the only U.S. museum with a collection, programing and exhibitions that focus on all Nordic countries: Norway, Sweden, Denmark, Finland and Iceland.

The new building will allow the museum to broaden the story it tells about Nordic American culture, she said, with exhibitions that also look at the pre-1840 and post-1920 culture, including immigrants who came to work for Boeing in the 1950s and those who work in local tech firms today.

The new museum will also be able to show contemporary Nordic culture — from architecture to art and food. That's not easily done in a 1908 former school.

The new building will be on three parcels the museum owns that are just a few blocks from the Hiram M. Chittenden Locks. This site will give the museum more visibility and connections to the community.

The museum board decided to keep the museum in Ballard because of the neighborhood's Nordic roots, Colbrese said. Many Nordic immigrants in Ballard worked in fishing and logging.

Ballard still celebrates these roots, she said. The 17th of May celebration of Norway's constitution has been held in Ballard for over 125 years, and is the largest event marking the occasion outside of Norway.

Colbrese said 12 percent of King County's population identified as having Nordic roots in the most recent census.

Funding so far has come from the state, individuals and foundations. The museum is also asking King County and the city of Seattle for funding, and will kick off a public fundraising campaign in April.

“People have been extremely generous and extremely passionate about supporting this,” Colbrese said.