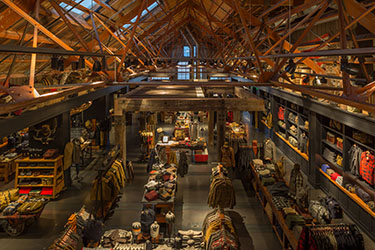 Photos by Lara Swimmer [enlarge]
The building houses Filson's store, manufacturing and offices all under one roof. 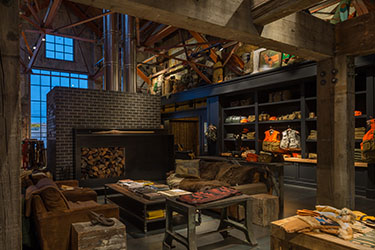 [enlarge]
The store has a trellis made of salvaged beams and a wood-burning fireplace.

The Seattle-based outdoor clothing and luggage retailer moved its headquarters to the building in 2013, but the store remained in the old headquarters on Fourth Avenue South.

Now the 54,400-square-foot building houses the store, manufacturing and offices all under one roof.

Shoppers can see the 15,000-square-foot manufacturing floor, where all the company's bags are produced. Luggage and accessories account for 60 percent of Filson's sales.

The store is located above the production area on the second floor, with a design that reflects the company's rugged, crafty aesthetic.

The space has a large trellis made of salvaged wood, a wood-burning fireplace, and old timber beams taken from a Boeing factory in Kent and a demolition site in South Lake Union.

Heliotrope architects designed the store, and Dovetail General Contractors was the builder. Peter Baker of Montlake & Associates was Filson’s project manager. Filson also worked with Broderick Architects, which designed other tenant improvements in the headquarters.

“It's all about the Northwest,” he said of the decor. “It's a very Northwest story.”

The company didn't plan to move its store to the new headquarters at first, Madden said, but having views of the manufacturing floor offered a compelling way to communicate to customers that Filson stands behind its products.

Also, he said the new building had advantages such as more space, a better location and better parking.

Madden said he expects the new store to do double the business of the Fourth Avenue store.