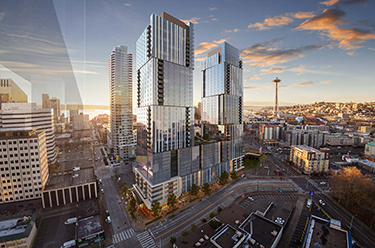 Clise Properties has refined the design for its twin tower complex at 2301 Seventh Ave. in the Denny Triangle.

Documents submitted to the city show the tweaked design resembles the “Cubist” option that was one of three Clise had considered.

The complex would have two 40-story towers and a 10-story podium, with a total of 638 residential units, 10,500 square feet of retail and 185,000 square feet of office. Parking would accommodate 747 vehicles.

The block is shared with Antioch University, and an existing structure on it would be demolished. An alley separates Antioch from Clise's site.

Graphite Design Group is the architect.