Bellevue wants design for ‘grand connection' path through the city 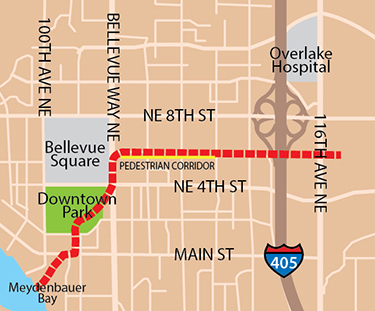 The goal is for a corridor that will attract locals and visitors, like the High Line in New York City and River Walk in San Antonio.

Bellevue has started planning a pedestrian and bike corridor that would go from the waterfront park at Meydenbauer Bay through downtown and span Interstate 405 to connect downtown with the commercial area in Wilburton.

City officials envision this “Grand Connection” as a must-see urban experience like the High Line in New York City and River Walk in San Antonio.

(Editor's note: This story has been changed to correct the length of the route.)

Much of the route would be on public spaces — such as the Pedestrian Corridor, Transit Center and City Hall Plaza. The rest has not been determined, but city officials said parts may be on sidewalks, including on Bellevue Way and Northeast Sixth Street.

Wednesday is the deadline for qualifications from teams that want to do conceptual design and related work, according to a notice in the Jan. 6 DJC. The budget for this initial phase is $250,000.

The city wants the team to come up with bold ideas for a “landmark” span over I-405 to connect downtown with Wilburton's commercial area, which Deputy Mayor John Chelminiak said is ripe for redevelopment.

Sewer and water connections and arterial roads in the commercial area are being improved and there are plans to extend Northeast Sixth Street.

In 2023, a light rail station will open in that area, adjacent to the Eastside Rail Corridor, which is becoming a pedestrian trail.

Chelminiak said Auto Row and industrial buildings, and strip malls are not the best uses for that commercial area given rising land costs, new infrastructure and planned transit. “The dirt's worth too much,” he said.

The city plans to upzone the area, Chelminiak said, but not to the density of downtown: “I think we would be looking at residential, retail, commercial — all of those.”

Late this year, Bellevue will hire a consultant to help make that area more walkable and transit-oriented. Bradley Calvert, Bellevue community development program manager, said the goal is to complement the high growth of downtown and Bel-Red areas on either side.

Downtown Bellevue has wide streets and superblocks that are great for drivers but not pedestrians, though the city has been creating some through connections.

“Our city was built as a very car-centric city,” said Chelminiak. “In an urban area you have to have a way for people to walk around.”

The Grand Connection would do that, he said, by leveraging the extensive public spaces and adding elements that offer comfortable but lively experiences, such as vendors, art, water features, performances and outdoor cafes.

He said developers are required to build public spaces along the Pedestrian Corridor and those could contribute to the Grand Connection.

The I-405 span should be “fairly spectacular,” he said, likely an aerial bridge or perhaps a cap. “I certainly want to see something more spectacular than a concrete walk with a rail.”

No date has been set to start building the Grand Connection.

Calvert said cost estimates from the consultant for the I-405 span and the rest of the Grand Connection will help determine financing. The city hasn't decided if the Northeast Sixth Street extension and the I-405 span could be integrated.

Creating the Grand Connection is more about programming and connectivity rather than overhauling lots of streets, he said.

Open houses are planned and the city expects to have a tentative conceptual design by summer.

Andrew Kohr, a senior landscape architect in the Atlanta office of Stantec, said Bellevue's roads and superblocks are not pedestrian-scale.

“You're asking a pedestrian to enjoy a space that isn't designed for us. It's designed for cars. We have to find a way to break those spaces down in a way we can relate to,” he said.

Stantec, an architecture and engineering firm, will respond to the RFQ for Bellevue's Grand Connection, he said.

Kohr said such projects create a new type of urban experience that connects people to nature and gives them a sense of place. Corridors like this encourage people to stay, spend money and come back again. They also lead to other investments. “Whether it's a ball field or a greenway, great civic spaces spur redevelopment and spur interest in the community,” he said.

Kohr said bridging an interstate is both expensive and complicated: “You're talking multi-millions of dollars, depending on the size of the project.”

But more cities are seeing value in reconnecting areas divided by freeways, said Kohr, who is chair of Atlanta's Urban Design Commission.

Kohr said St. Louis intends to connect the Gateway Arch grounds and downtown by putting a park over Interstate 44. Atlanta wants to bridge the Georgia 400 highway with a linear park to reconnect the Buckhead neighborhood.

Freeway Park over Interstate 5 in Seattle was completed in 1976, and shows bridging a freeway can be done successfully, he said, but it is a more intimate space than Bellevue apparently plans.

Projects like the High Line should inspire Bellevue, Kohr said, but the city needs something unique that celebrates its community.

“If we built 10 High Lines, the High Line isn't as amazing,” Kohr said.

“It's about creating an urban experience and promoting walkability,” he said. “I think that's become every city's goal.”