FabCab says its line of prefab homes will let people age in place, and in style 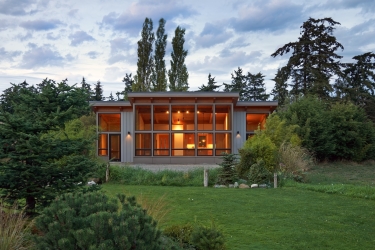 Photos by Dale Lang [enlarge]
This prefab Port Townsend house won a national award. It is in a seven-lot community that surrounds a common garden. 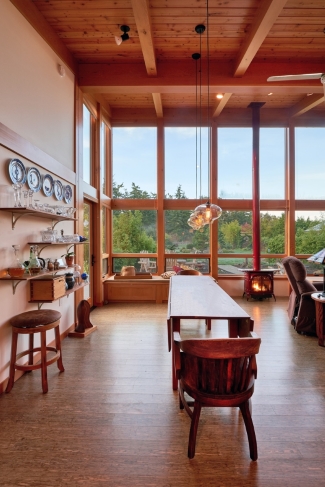 [enlarge]
The clients in the Port Townsend house are a couple, and one of them uses a powered wheelchair.

A Seattle architecture firm called FabCab is designing a line of prefabricated houses that it says will let people live in a space that meets their needs as they age.

“Our clients tend to be empty nesters, so many are thinking about the future and they want a house that won't be in their way in 15 years — that they can remain in,” said Don Argus, an architect with the firm.

He was the project architect on a house in Port Townsend that recently won a 2016 Housing and Community Design Award from the U.S. Department of Housing and Urban Development, and the American Institute of Architects.

It is among four housing projects nationwide that won the awards. The others are in California, Illinois and Texas.

The Port Townsend house won in the accessibility category — the Alan J. Rothman Award. James Hall and Associates of Camano Island was the contractor.

Architect Emory Baldwin founded FabCab in 2010 and co-owns the firm, which specializes in housing designed to be flexible as clients' needs change over their lifetime. This was the subject of Baldwin's thesis for a master's in architecture from the University of Washington.

Bruce Waltar is the co-owner and business manager for FabCab.

The six-person firm designs two lines of prefab houses and sells building materials as part of the package. It also does custom work.

One is called TimberCab, a timber-framed house with structural insulated panels and a wall of windows. The frame and shell are precut, trucked in and assembled on-site by a contractor.

TimberCab costs between $325 and $350 per square foot for design, engineering, construction and materials.

The other house is called ModCab and it has fewer windows so it can be closer to other houses, including in urban areas. It is made of load-bearing structural insulated panels but no timber. Panels are precut, trucked in and assembled on-site. The first ModCab will be built on Vashon Island for a couple's primary residence.

The firm has completed 16 houses and has 10 in construction or design. It has also designed an accessory dwelling unit that conforms to Seattle regulations, but none have yet been built.

Argus said FabCab's clients often use the houses for vacations, but may move into them when they retire. Some of the houses are for people with disabilities.

The firm has designed houses on Whidbey, Orcas and Vashon islands, and in Cle Elum. It's also expanding geographically, with projects in New Hampshire, North Carolina, Wyoming, California and Maine.

By incorporating universal design, FabCab tries to keep the houses from feeling clinical, Argus said. It uses high quality materials such as Douglas fir for the timber-frame houses and attractive finishes, including flooring that wheelchairs can roll over easily, he said. The firm also selects modern, well designed products for houses, such as grab bars by KEUCO.

“We're not forgetting architectural values as we expand the definition of what it is to be accommodating,” Argus said.

FabCab has yet to sell an accessory dwelling unit, but Argus said they frequently get calls from people who want one.

Getting an ADU constructed is no easy task, he said. “What you're doing is adding a second dwelling unit to a lot that was meant for a single-family house. Maybe there's enough room there, maybe not.”

Also, he said, it's a lot easier to get a prefabricated structure into a backyard than a modular one, but getting construction materials into the yard is a challenge either way.

For one potential FabCab client, “the only way into the backyard was through the garage and up a flight of stairs,” Argus said.

“We're sure we're going to find the right site eventually,” he said.

The 1,325-square-foot prefab Port Townsend house that won the award is in a seven-lot community that surrounds a common garden. The clients are a couple, and one of them uses a powered wheelchair.

FabCab said the design offers an accessible route from the street, through the house, and to the patio and garden. The husband uses an accessible van that, along with a ramp, is kept in the attached carport.

“It's no good to have an accessible house that you can't get into or out of,” Argus said.

Telescoping bedroom doors let the owners choose how to use the rooms and adapt their living space.

Pocket doors have large panel-mounted handles that do not disappear entirely into the wall so they are easy to pull out. The entry door has a glass panel so people outside can be seen from any height.

The kitchen can be used from a standing position and a wheelchair, and there is knee space beneath the sink. A water faucet on the cook top reduces the need to carry heavy pots and the oven can be reached without bending down. Base cabinets are fitted with drawers and a floor-to-ceiling cupboard can be accessed from a wheelchair.

There's knee space beneath the vanity in the bathrooms, a universal height toilet, and the shower has no threshold. Towel bars and an adjustable showerhead bar are anchored as grab bars.

Two sets of shower valves and heads in each shower can be used by both owners without readjusting.

Go to http://tiny.cc/7datdy for all the winners.