Urban Union lobby has a wood piece by BAMO 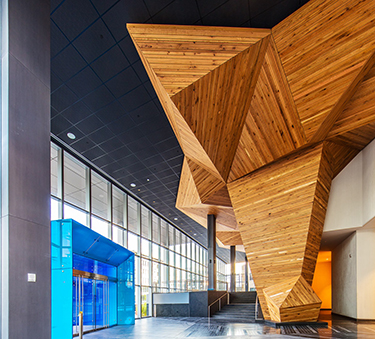 Urban Union, a 12-story, 268,000-square-foot office building, is being completed at 501 Fairview Ave. N. in South Lake Union and is fully leased to Amazon. The developer is Schnitzer West.

A representative for CollinsWoerman, the architect, said Amazon will move in early next year.

Urban Union has a large wood art element in the lobby designed by BAMO, an interior design firm based in San Francisco. BAMO's website lists other projects it has worked on for Schnitzer West including Madison Centre in Seattle, Centre 425 in Bellevue and Civica Cherry Creek in Denver.

Urban Union will also have 6,000 square feet of retail, and 392 underground parking stalls. A two-story gathering place with “third place” work spaces, restaurant, coffee shop, flexible meeting rooms and a fitness center are also planned, and there will be a glass-enclosed conference center with an outdoor terrace on the roof.

You can watch a time-lapse video of the construction at http://tiny.cc/ebnoey/.

(Editor’s note: The story has been changed to correct the name of Centre 425 and the retail leasing agents.)