Historic Pioneer Building reopening, with space for the way we work now 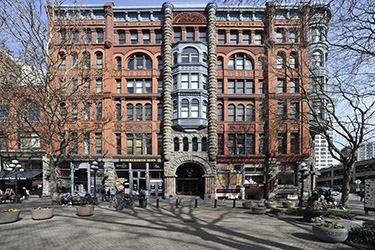 DJC file photo [enlarge]
The Pioneer Building was built by Seattle pioneer Henry Yesler on the site of his former home. It was one of the first major buildings erected after the great fire of 1889. Each floor had a safe for tenants to use during the Klondike gold rush.

Level Office, a Chicago-based firm that provides short-term and co-working office space, will hold a grand reopening on Thursday, Nov. 3, from 4-7 p.m. for the landmarked 1892 Pioneer Building.

(Editor's note: The day of the reopening was changed to Thursday.)

The firm bought the six-story building last December for $20.5 million, then started renovations. Weaver Architects is the architect. MRJ Constructors is the contractor. The building is at 600 First Ave., facing Pioneer Square.

People can lease both private and shared offices, the latter via memberships starting at $199 per month. Level Office advertises private suites ranging from 800 to 2,400 square feet. A small private office starts at $349 per month. Some individual offices are as small as 84 square feet. “We're flexible,” says the leasing agent.

Most of the co-work space is on the street level and below. A new stairwell has been added to connect the former basement-level antiques mall to a light, inviting space above (at the corner of James Street). Some of the lower private offices are windowless, but have areas of exposed brick and sandstone — essentially the same view as you get on Bill Speidel's Underground Tour, which still enters and exits the building.

Up the central stairwell, flanked by the building's signature twin atriums (on both sides of the caged elevators), some original tenants do remain. Level Office estimates 40 tenants have leases lasting into 2018 or slightly beyond, representing about 20 percent of the leasable space.

All the old retail tenants are gone, with the exception of Marcela's Creole Cookery at 106 James St. Doc Maynard's Public House has moved next door to 614 First Ave.

Level Office hasn't yet decided what to with the old Doc Maynard's space (now a construction staging area). The bars and music stages are still intact, though the mezzanine will be removed.

Level Office competes in the same sphere — though at a lower price point — as WeWork, which Martin Selig recently announced will be his anchor tenant at a 36-story mixed-use tower planned for Third Avenue and Lenora Street. WeWork's sister company, WeLive, will offer short-term apartments in the tower.

The Pioneer Building was given National Historic Landmark status in 1978, following a 1973 restoration.

It was designed by Elmer Fisher for Seattle pioneer Henry Yesler, who built it on the site of his former home, near his sawmills. It was one of the first major buildings erected after the great fire of 1889. Each floor has a safe (now inoperable), used by tenants during the Klondike gold rush.