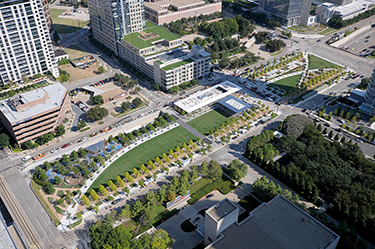 A volunteer group advocating for more lids over Interstate 5 in Seattle has launched a website at http://www.lidi5.org and wants the city to study where the lids should go.

The group, called LID I-5, said in a press release that it held a design charrette in May. Participants were mostly from Capitol Hill, and came up with ideas for how to use new land over I-5. The ideas included parks, affordable housing, retail, an elementary school, an amphitheater near the Paramount Theatre, walking and bike trails, and renewable energy generation.

Scott Bonjukian of LID I-5 estimates that by 2035 the city center will have a park deficit of over 20 acres as thousands of new homes and jobs are created. Bonjukian is on Lid I-5's steering committee and is an urban designer with Makers Architecture & Urban Design.

John Feit, LID I-5 steering committee member chair and an architect at GGLO, said, “People usually associate a lid with a park, but we're not necessarily advocating for that.” He said a Seattle lid could have housing as well as mixed-use buildings.

Lid projects with parks in other parts of the country have cost around $500 per square foot — and more if they include buildings, according to the advocacy group, which got that figure by averaging the cost of completed and proposed projects.

Feit said just buying land in downtown Seattle would cost $1,000 per square foot or more, so there is value in lidding I-5. The group used King County's eSales tool for private real estate transactions in downtown over the last three years for that figure.

The group wants the city to do an analysis of where lidding I-5 would be most cost effective and have the greatest value. It proposes the study be funded as part of the public benefits the Washington State Convention Center must provide in connection with its expansion.

The analysis would focus on the city center, where I-5 runs in a trench below street level and where foot traffic is highest. But it would also identify possible sites for lidding in other areas such as the University District.

An open house will be held Dec. 7 at WSCC to talk about the public benefits. Other proposals for the package include improvements to Freeway Park, safety upgrades for Olive Way, the Terry Avenue green street on First Hill and affordable housing.

LID I-5 said Seattle was among the first U.S. cities to cover portions of its freeways, starting with Freeway Park in 1976.

Freeway lids were recently completed on the east side of Lake Washington above state Route 520 and two are planned in the Montlake and Roanoke neighborhoods. Bellevue's Grand Connection bicycle and pedestrian proposal includes a lid over Interstate 405.

The group said over 24 U.S. cities have completed lid projects and more projects are in design or construction.

One lid is the 5.2-acre Klyde Warren Park in Dallas that reunites the Midtown neighborhood with an arts and entertainment district.

LID I-5 said in Los Angeles, a 38-acre lid park over U.S. Highway 101 is going through environmental review and construction could begin next year. In Washington, D.C., the Capitol Crossing project is building 2.2 million square feet over I-395. And in central Atlanta, the Downtown Business Improvement District is planning to fund a $1 million engineering study for a 14-acre lid that would support parks and private development.

LID I-5 said most lid projects use a mix of local, state and federal funding, and recently private donations.