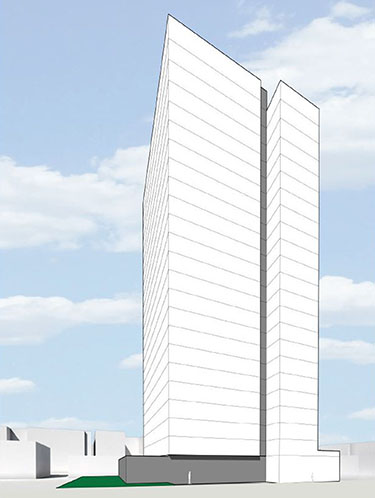 Rendering by NBBJ [enlarge]
Fields Holdings of Los Angeles says units will range from studios to four-bedrooms. The tower may have an indoor pool, basketball court and theatre.

A Los Angeles developer will show plans next week for what would be the University District's tallest new building in decades: a 24-story tower on the former Chevron gas station site at 4700 Brooklyn Ave. N.E.

Two years ago, an LLC associated with Fields Holdings paid $5.6 million for the 16,462-square-foot site, which is at the northeast corner of Brooklyn and Northeast 47th Street, south of the Safeway.

Prior plans by Caron Architecture for a mid-rise development were abandoned after the U District was upzoned in February. That raised the site's development potential from 65 to 240 feet.

NBBJ designed the proposed 24-story residential tower, which would have 229 units. Fields writes of the project, “Unit types from studio, 1-bed, 2-bed, 3-bed and 4-bed units will be offered, along with ‘family friendly' two-level townhomes with private decks, meeting a range of needs from students to small families and encouraging a diversity of tenants at different life stages.”

Tenants would enter on Brooklyn. The ground floor would also have a bike room and two retail bays of about 1,000 and 4,500 square feet. The larger bay would face the corner of 47th. About 3,000 of exterior green space is planned on the north side of the building.

One level of underground parking for about 32 vehicles would be accessed from the alley to the east. Parking is not required for the site, which is presently well-served by bus transit. And the light rail station will open in 2021, two blocks to the south.

The roof level would have an indoor pool, terrace, lounge, gym and study area. Fields says the tower may also have an indoor basketball court and movie theatre on the second floor.

Fields says, “The proposed development supports the ongoing urbanization of the recently upzoned University District. The project is designed as an elegant, tall, ‘skinny' tower on top of a 16-foot-tall podium.”

Above the podium, the tower's floor plates would measure about 8,649 square feet.

Fields Holdings specializes in housing near campuses, usually geared toward students. Fields previously partnered with CA Ventures to create a mid-rise building at 4717 Brooklyn, roughly opposite the Chevron site. It was sold two years ago for $27.7 million, and is now called LIV Seattle.