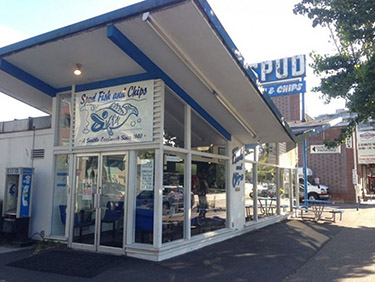 [enlarge]
Spud Fish & Chips, with its butterfly roof, was constructed in 1959 at Green Lake. Blueprint Capital wants to redevelop the site for apartments.

Blueprint Capital wants to redevelop the site for apartments.

The 1,637-square-foot building, with its butterfly roof, was constructed in 1959. It was designed by Edward L. Cushman in the flamboyant “Googie” style, which influenced fast-food eateries, motels and gas stations across the country after World War II.

Spud's pending demolition has alarmed preservation groups Historic Seattle and Docomomo WEWA, as well as Alan Hess, an architecture critic and author of a book on Googie, and they argue that it should be preserved.

Eugenia Woo, director of preservation services for Historic Seattle, called it one of the last and best examples of modern commercial architecture in Seattle, and of the Googie style, with its distinctive roof line, large neon sign and window wall. “It's really an iconic structure and not just in the Green Lake neighborhood, but in Seattle and the Northwest.”

Woo said that ideally the building would continue as Spud Fish & Chips. “It's never been vacant,” she said. “It's been the same use since it's been built, and we'd like to see that continue, or perhaps the new [Blueprint] project can be incorporated onto the site.”

Seattle-based Blueprint plans to demolish the Spud building and construct a four-story building designed by Cone Architecture. It would have 50 small efficiency dwelling units, 10 apartments, one live-work unit and 1,368 square feet of restaurant space.

The Spud business signed a letter of intent to return with a long-term lease after construction is complete, according to Mark Knoll, CEO of Blueprint, a Seattle real estate investment trust focused on housing.

He said Blueprint respects the landmark process and is going to go through it.

As he understands it, he said, a landmark designation would prevent the REIT from demolishing the building, “unless we appeal.” He declined to speculate on what would happen if an appeal were to fail. “I just want to take it one step at a time,” he said.

Knoll said Blueprint requested a ruling from the landmarks board because “we think that somebody else would have nominated it anyway.”

In Seattle, the landmark nomination process is required in certain circumstances as part of getting a land use permit if a structure on the site could meet the landmark criteria.

Landmarks may be demolished only if the owner can demonstrate there is no reasonable economic use. They cannot be significantly altered without a permit from the landmarks board.

The Johnson Partnership prepared the nomination application for the Spud building for Blueprint Capital Services LLC.

According to the application, the building was constructed just west of its current location, and moved in 1967. A shed roof addition was completed in 1982.

“Googie” architecture got its name from a Sunset Strip coffee shop, designed in 1949 by John Lautner, who had worked with Frank Lloyd Wright early in his career, The Johnson Partnership notes.

Googie style featured flamboyant elements and new materials such as cast concrete and plastic. Characteristics include upswept roofs that look as if they might take flight, boomerang shapes and starbursts.

Alan Hess, an architecture critic for the San Jose Mercury News, called the Googie style cutting-edge and said — unlike a lot of modern architecture — it was popular, designed to get people driving past in their cars to stop and stay a while.

Hess, who wrote “Googie Redux: Ultramodern Roadside Architecture,” sent a letter to the Landmarks Preservation Board in favor of landmarking the Green Lake Spud. He said the style is rare, so examples that remain should be maintained.

Spud was founded on Alki in 1935 by brothers Jack and Frank Alger. Spud at Green Lake was part of the chain until 2001, when the Alger family sold its restaurants and land. Ivar's owns the Alki location, and another investor owns the locations at the Edmonds ferry terminal and Juanita Beach.

In 2007, plans were made to demolish the Spud Green Lake building and construct a four-story apartment building, but that was put on hold during the recession.

The 9,123-square-foot Spud site sold last year for $3.1 million to an entity of Blueprint Capital. The sellers were a married couple who acquired the property and the Spud business in 2001 for $633,000.

The landmarks board will consider the Spud building at a meeting at 3:30 p.m. in Boards & Commissions Room L280 of City Hall, 600 Fourth Ave.

However, if demolition is coupled with a proposal to develop the property, that may trigger review by the landmarks board.