Elara at the Market opens with 150 luxury apartments on Western 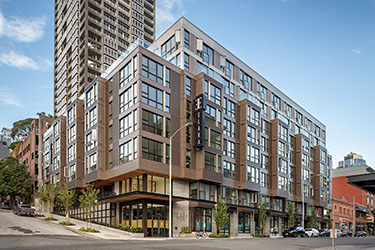 Johnson Development Associates has completed Elara at the Market, an eight-story apartment building 2134 Western Ave., just north of Pike Place Market at the southeast corner of Western and Blanchard Street.

The 150-unit building includes five live-work units, all on Western.

Clark Barnes is the architect and Compass Construction is the general contractor.

The luxury property has a number of extras for residents, such as a wine room for bottle storage and dinner parties, rooftop cooking spaces, a deck with views of the Space Needle and Puget Sound, and a lounge called Elev8.

The lobby has a large fireplace, and living room and bar spaces.

The apartments are eight blocks from Amazon's Denny Triangle campus.

Spartanburg, South Carolina-based JDA purchased the Elara site, a former parking lot, for $8 million in 2015. The project is the first for the developer in the Seattle area.