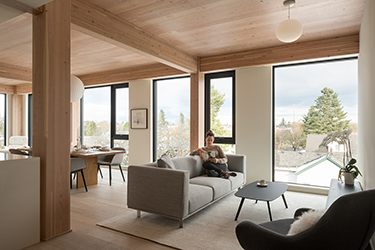 DLR Group will hold a panel discussion for real estate developers and investors on the business case for mass timber construction in Seattle.

A team headed by DLR developed a concept for a 12-story, 305,000-square-foot mass timber office and hotel tower in Seattle that will be shown at the event. The design requirements for the tower will be discussed, as well as a cost comparison between mass timber and cast-in-place post-tension concrete, according to architect Matthias Olt with DLR.

In April, the city of Seattle said it will consider proposals for mass timber projects — including cross laminated timber — up to 18 stories.

Projects must comply with national code changes being proposed for the 2021 building code, according to Bryan Stevens, customer service manager with the Department of Construction & Inspections.

The International Code Council is considering the changes as part of the three-year cycle for updating the code, according to Stevens.

A vote is expected in the next few weeks, and if the changes are approved, the city would permit up to 18-story mass timber buildings through a request for a building code modification. This allows Seattle to consider proposals before the state adopts code changes.

The panelists at DLR's event are with firms on the concept team for the 12-story Seattle tower. Olt will discuss architecture and interior design for the tower, and Amarpreet Sethi of DLR will talk about environmental engineering and MEP systems.

Other panelists include Chris Evans of Swinerton (construction and cost); Davin Lewis of Fast+Epp (structural systems); and Carson Bowlin of Heartland (real estate development and underwriting). Ethan Martin of WoodWorks is the moderator.

Martha Schwartz Partners of Brooklyn, New York, was also on the team, which Olt led.

He said mass timber has many advantages over conventional construction, including reduced construction schedules, higher quality, a favorable environmental footprint, local supply, and meeting the demand for natural materials.

However, there are challenges, he said. The front-loaded, manufacturing-oriented approach to system design requires even closer teamwork by architects, engineers and contractors, manufacturers and suppliers.

To attend the event, R.S.V.P. at molt@dlrgroup.com.