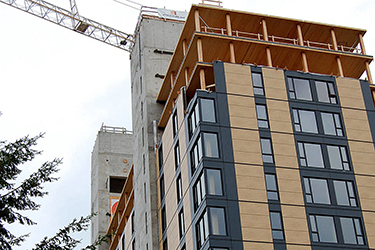 Photo provided by Forterra [enlarge]
The 18-story Brock Commons is at the University of British Columbia in Vancouver. Forterra said code changes will allow tall wood buildings in this state.

Forterra said that on Friday Washington revised state building codes to allow tall structures to be made from mass timber — including engineered wood like cross laminated timber.

The State Building Code Council approved a package of code changes that allow mass timber construction as tall as 18 stories, Matt Ojala, director of government affairs at Forterra, said in an email.

That includes the creation of three new types of construction in the state's building code: They are:

• Type IV A: up to 18 stories and 270 feet (The mass timber is fully protected with noncombustible materials.)

• Type IV B: up to 12 stories and 180 feet (A limited amount of exposed mass timber elements is allowed.)

• Type IV C: up to 9 stories and 85 feet (The mass timber is permitted to be unprotected.)

The new code changes take effect at the end of the regular legislative session in April. Builders will be allowed to follow the new prescriptive code, rather than having to go through a lengthy, and costly performance-based review in order for a project to move forward.

He said the time and costs associated with performance-based reviews, in jurisdictions that allow them, have prevented tall mass timber projects from advancing in Seattle and other cities, he said.

Forterra, a regional sustainability organization, partnered with the American Institute of Architects Washington Chapter to advocate for the code changes.

Forterra said mass timber has valuable properties like structural strength, seismic and fire resistance, a warm aesthetic, and — if the wood is responsibly harvested — a reduced carbon footprint. Forterra has championed CLT because of its potential to create rural jobs, lessen wildfire risks in forests, and possibly lower construction costs since CLT panels can be readily fabricated into modules that are easily combined on a building site.