WSP to lead study team on lidding more of I-5

A consultant team led by global engineering firm WSP will do a feasibility study on lidding more of Interstate 5 between Denny Way and Madison Street downtown.

In press materials, the city said the $1.2 million study will explore building one or more new lids across I-5, in addition to the existing lids for Freeway Park and the Washington State Convention Center. 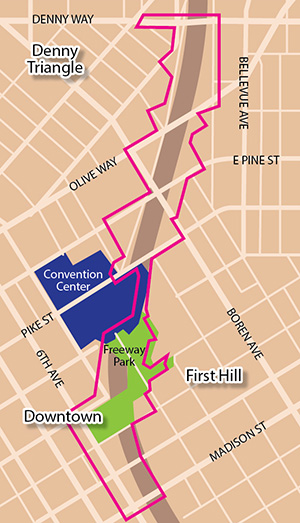 The study area covers about 15 acres.

The Seattle Office of Planning & Community Development is leading the effort.

Sam Assefa, director of OPCD, said, “While we rely on Interstate 5 as a primary transportation spine for our city and region, it comes at a cost. The feasibility study is a key next step toward creating new lids across I-5 that can help reconnect our neighborhoods, reduce air and noise pollution impacts, and create new opportunities for public space, housing and other uses in the most built-out part of Seattle.”

The study will investigate structural, urban design and financial solutions that would bridge the highway, support new uses and reconnect neighborhoods that have been divided for over 50 years, the city said. It is expected to be complete by early 2020.

The study is being funded as part of the “community benefit agreement” related to the convention center's expansion.

The city said funding was secured thanks to community members who have been advancing the Lid I-5 proposal. The work of the group, called Lid I-5, will help inform the study and two of its members will be on its steering committee.

Since 2015, the group has been promoting new lids to reconnect Capitol Hill, First Hill, Denny Triangle and downtown. The lids could be platforms for parks, affordable housing, civic facilities and commercial development. They also will help mitigate noise and air pollution, and make it easier for people to walk.