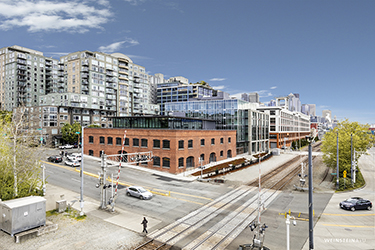 The State Hotel in downtown Seattle won the award for best preservation project for 2019 from Historic Seattle.

The hotel and other winners will be honored at the organization's Preservation Celebration Benefit at 6 p.m. Sept. 19 at the Georgetown Ballroom, 5623 Airport Way S. in Seattle. Historic Seattle recognizes outstanding achievements of individuals, businesses and community groups in preservation.

The benefit will be emceed by Cynthia Brothers of Vanishing Seattle, which documents disappearing and displaced businesses, homes, communities and cultures of Seattle and received Historic Seattle's 2017 Community Advocacy Award.

Each year the benefit features a selected neighborhood, which for 2019 is Georgetown, considered Seattle's oldest neighborhood, Historic Seattle said in a press release.

The 91-room State Hotel at 1501 Second Ave. was completed in March and includes Ben Paris restaurant and bar.

Lake Union Partners redeveloped the former 1906 Eitel Building in a venture with investors including John Oppenheimer, CEO of Columbia Hospitality, which operates and manages the hotel.

The Eitel Building had been mostly medical and dental offices above retail until the 1970s, when the upper floors emptied out. It was purchased in 2015 for a little over $5.3 million.

The gut renovation was by contractor Exxel Pacific, with Weinstein A+U as the architect. The work included new building systems, elevators, a complete seismic retrofit, and the addition of an eighth floor, with eight rooms.

Weinstein A+U also was the architect on the Ainsworth & Dunn Building at 2815 Elliott Ave. in Seattle. The project by Meriwether Partners was completed in May. It has 62 apartments in a new building (10 Clay Apartments), and 32,000 square feet of office space in a renovated, landmarked 1902 warehouse, to which a third floor and roof terrace were added.

The winners were selected from more than two dozen nominations. Go to https://tinyurl.com/ybmghaw7 to buy tickets to the celebration benefit.