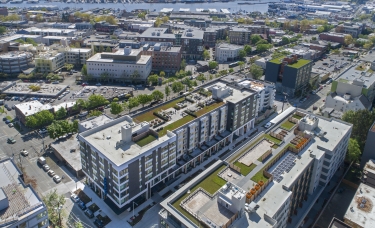 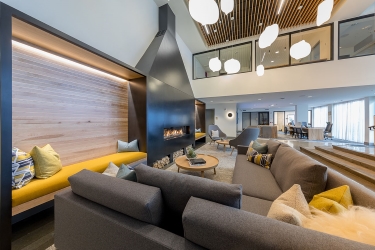 Photo by Brent Smith Photography [enlarge]
In the lobby, this Nordic-style fireplace is similar to those found in Scandinavian homes, meeting halls and pubs.

Ballard is one of the fastest growing neighborhoods in Seattle. With all that new development, residents might fear that gentrification is slowly tearing at Ballard's Scandinavian roots.

But don't worry Ballard, several recent projects have embraced your culture, including the new National Nordic Museum, Keelson Ballard apartments (Swedish for boat keel), Odin Apartments, which “float” on a base of traditional Scandinavian white bricks, and the Lillehammer Apartments, with its Scandinavian-influenced bright yellow and blue panels (think Ikea).

One of the newest developments to follow this trend is the two-building Valdok apartment complex, which recently opened its second phase at Northwest 56th Street and 17th Avenue Northwest. These apartments pay homage to the Norwegian couple that owned an accounting business on the site: Bjorn and Randi Valdok, who were married in Norway and moved to Ballard in 1959.

In addition to naming the building after the Valdoks, developer LMC (Lennar Multifamily Communities) also installed a plaque in the building that tells the story of how they immigrated to the United States. LMC bought the site from the Valdok family.

“Clark Barnes gave us exactly what we wanted — a focus on northern European design, not just Norwegian,” Reisinger said.

While Scandinavian elements can be found on the two buildings' modern exteriors, they abound inside Valdok.

Interiors were designed by Robin Chell Design, an Interbay company whose namesake principal has Scandinavian roots and lives in Ballard.

“The interiors of Valdok really capture the spirit of Scandinavian design,” said Robin Chell. “We designed an elegant, neutral palette that blends clean lines, natural woods, geometric patterns and playful pops of color. The common areas are warm and welcoming, sophisticated and soulful, and really play on the heritage of Ballard's Nordic roots.”

One of the focuses on the interior was to make it a comfortable space.

“The heart of the Scandinavian design is the concept of “hygge,” which is a quality of coziness that encourages contentment and well-being, and conveys a sense of home,” Chell said. “This design philosophy has become increasingly popular around the country, especially in regions like ours that have grayer, cooler climates. We are very proud of how Valdok pushes the boundaries of interior design, incorporating hygge with layers of light, unexpected materials and rich textiles.”

One of those “cozy” elements is the Nordic-style fireplace in the first phase, similar to those found in Scandinavian homes, meeting halls and pubs.

Valdok even has a room outfitted with European-type wooden board games. The development is rounded out with co-working spaces, conference rooms, lounges and rooftop decks.

Compass General Construction built the first phase of Valdok and the construction arm of LMC built the second.

Reisinger said LMC opened locally in 2013 and used third-party general contractors on its initial projects, but is shifting to mostly its own crews. Its first local project was the Atlas Apartments, which opened in late 2016 in Issaquah.

LMC targets core neighborhoods that are walkable, have good access to jobs and transportation, and have robust amenities.

Ballard fits that bill, according to Reisinger.