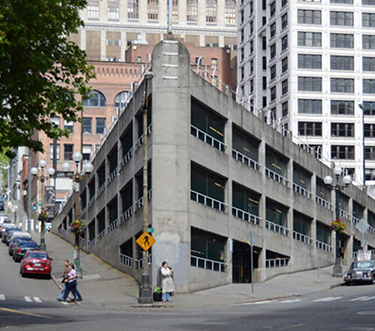 Photos from Looking4.com [enlarge]
The Sinking Ship garage looks like the bow of a boat due to the sloping site it was built on. 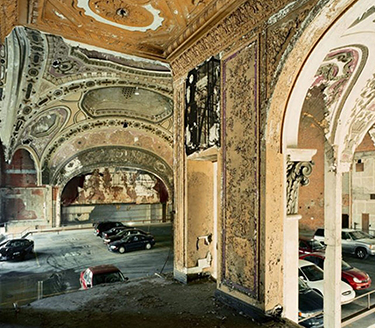 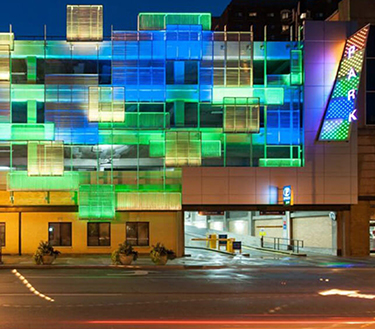 [enlarge]
Helix Garage in Kentucky was turned into a kinetic art piece with LED backlighting.

Seattle has gained another distinction among U.S. cities — it has the coolest parking garage.

British airport parking site Looking4.com and architecture and design publication Architizer made a list of the top 10 garages in the U.S. and let the public vote. The result? The triangular “Sinking Ship” garage in Pioneer Square took the top prize, followed by Michigan Theatre in Detroit and Helix Garage in Lexington, Kentucky.

This may sound familiar, as Sinking Ship was nominated last year for the world's coolest garage but didn't win.

Here's what Looking4.com said about the winner:

“After the historic Seattle Hotel was demolished in the '60s, the iconic Sinking Ship parking garage rose in its place. This architectural feat plays with the natural hills in Seattle's historic Pioneer Square neighborhood to create the illusion of a sinking ship.

“Though there was pushback at the time of the Seattle Hotel's demolition, Seattleites have come to love this quirky addition to their city and with this parking garage being built on the bones of the classic 1890s hotel, there are even rumors of the site being haunted.”

The Michigan project also has a backstory. Looking4.com said:

“While the outside of the Michigan Theatre is unassuming, the interior incorporates the magnificent historical arches and ornate designs of the original construction, which was an opulent 4,000-seat theater built in 1928. The grand interior was nearly demolished after the theater was driven out of business by the popularization of home television sets and in 1975 the property was abandoned and scheduled to be torn down.

“Upon inspection, workers realized that the structure of the theater was integral in the support of the neighboring building, so instead of demolishing it, they decided to repurpose the space into an extravagantly beautiful parking garage near the city's downtown.”

The garage in Kentucky received a structural renovation, and then architect Pohl Rosa Pohl was tasked with adding an artistic element to the plain facade. To brighten it up, Pohl Rosa Pohl designed three layers of steel panels suspended on a vertical steel scaffold, which give depth to the structure's face. At night, the panels are lit with colored LEDs.

Looking4.com says parking garages sometimes get a bad rap for being gray, uninteresting and uninspiring. Its contest debunks that, by spotlighting garages that add to their environments.