Seattle apartment projects have been getting taller 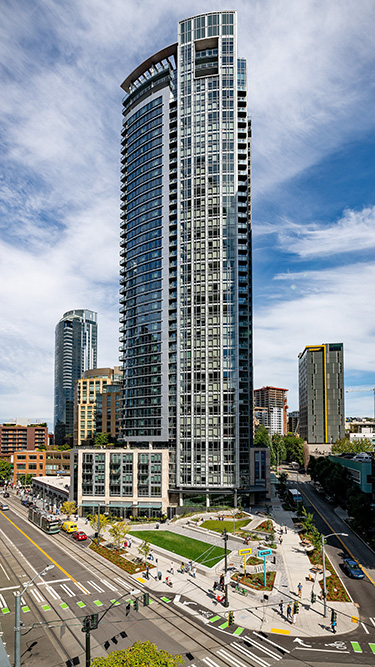 Your eyes aren't deceiving you: There are a lot more high-rise apartments getting built now in Seattle than in previous decades.

RENTCafe.com said 34 high-rise buildings with primarily apartments were completed in Seattle from 1990 to 2018, with the tallest being Stratus, at 43 floors.

The nationwide apartment search website said 26 of those high-rises were completed in the 2010s while only three were delivered in the 1990s.

The information is part of an analysis RENTCafe.com did on apartment development in the 30 largest cities in the United States. It looked at multifamily buildings with at least 50 apartments, some of which might have a few owner-occupied condos, it said. Data for 2019 is not included.

RENTCafe.com said that with demand for apartments strong across the country, combined with the scarcity and value of land sharply increasing, developers in urban areas are looking upwards in their quest to provide a healthy supply of residential units.

In the 1990s, the average apartment building in the U.S. had three floors. The following decade the average height was around four stories, and this decade, with a boost in high-rise construction, the average building height rose to six floors, RENTCafe.com said.

Seattle trailed three other major cities in the number of high-rise apartment buildings built during the 2010s: New York (112), Chicago (71) and Philadelphia (27).

Boston was No. 1 among cities from 2010 to 2018 for percentage of new apartment projects that were high-rises: 55%. But fewer total high-rises were built in Boston (24) than in Seattle (26) over that period.

RENTCafe.com is part of Yardi Systems Inc. a global technology company, with products and services to serve businesses in real estate markets.