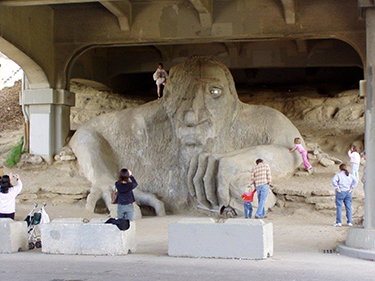 Photo provided by Seattle Department of Neighborhoods [enlarge]
Troll’s Knoll Park opened on the west side of the troll in 2016. The new park space would be on the east side.

A community group wants to turn a just under 1-acre green space near the popular Fremont Troll in Seattle into a public park.

The troll is at North 36th Street and Winslow Place North, beneath the Aurora Bridge, in the Fremont neighborhood.

The Friends of the Troll's Knoll maintains and activates the green space right-of-way on the east side of the troll — a tourist attraction which it said is visited by tens of thousands of people each year.

Friends is seeking qualifications by March 13 from landscape architects to design a plan and provide a cost estimate for the park, according to a Feb. 19 public notice in the DJC.

Friends is hoping the new park will complete Troll's Knoll Park, which opened on the west side of the troll in 2016. A park was supposed to be created on both sides, but the city determined it did not have the money to do it all, said Kaley Bender, chair of the steering committee for the Friends group.

Bender said developing the east side park could likely cost $700,000 to $800,000 based on the budget for the original park. Friends expects to start a fundraising campaign in August that should last six to 12 months, and then potentially start construction.

It is looking for a plan that meets Seattle Parks and Recreation standards for a fully programed park, as it wants the city to maintain and manage it. It also wants elements that activate the area and draw tourists up from the troll. It envisions art, seating and perhaps children's play equipment.

The plan should also address noise pollution and air quality from the bridge and stormwater filtering, along with ways to deal with erosion and runoff near the troll, which is surrounded by dirt.

Bender said the group hopes to preserve as many trees as possible in the urban forest now on the site.

The park would be next to a highway so “it's maybe not somewhere you would spend an hour of your time,” but people walk there on way to catch buses, and it has views of downtown, Bender said.

The property is Seattle Department of Transportation right-of-way, but according to the RFQ the agency has agreed to it being a park after improvements are made to the grounds.

In March, the city cleared out a homeless encampment of about 70 people on the property.

The encampment was difficult for the neighborhood, Bender said. “We realized we needed to activate the space to encourage positive use,” she said.

Friends received a $685,000 grant from the city in 2010 for almost all the cost of Troll's Knoll Park on the west side of the troll, Bender said.

It recently was awarded a $25,000 Seattle Department of Neighborhoods matching funds grant, of which up to $19,500 is for the landscape architect for the east side. The work is expected to be done by July 17.

The troll came into being this way: In 1989, the city asked the Fremont Arts Council to launch an art competition to rehabilitate the area under the bridge, which was becoming a dumping ground and haven for drug dealers. A team led by sculptor Steve Badanes won the competition and was inspired by the folktale Billy Goat's Gruff.

The troll is made from rebar steel, wire and two tons of ferroconcrete. It is 18 feet tall and has a shiny metal eye, and is crushing a Volkswagen Beetle with its left hand.