Seattle waterfront revamp to finish in 2024 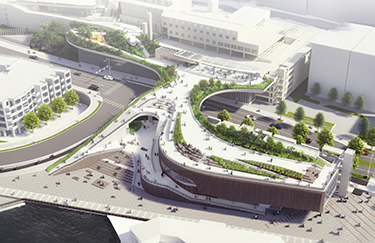 Rendering provided by city of Seattle and James Corner Field Operations [enlarge]
The Overlook Walk — an elevated pedestrian pathway between Pike Place Market and the waterfront — will make the connection between the retail core, the market and the water.

The COVID-19 pandemic has not slowed Seattle's $737 million revamp of its central waterfront, which will become the city's new “front porch” when complete in 2024, the director of the office overseeing the project said.

Given the public health crisis, the city had to free up some waterfront funding by delaying completion of two of the project's 15 elements, but that did not move out the final completion date for the 20-acre waterfront park, said Marshall Foster, director of the Seattle Office of the Waterfront and Civic Projects.

He said that when all the pieces of the new waterfront come together, it will change our mental map of downtown. That's in part because the Overlook Walk — an elevated pedestrian pathway between Pike Place Market and the waterfront — will make the connection between the retail core, the market and the water. “The waterfront won't feel like an appendage, but (part of) the heart of downtown,” he said.

Foster said the city is working on safety issues downtown and some stores and restaurants have closed of late, but the waterfront investment should help spur a recovery. “It's a huge pillar of how downtown is going to recover,” he said. “It's going to be a statement of hope and a shot in the arm that Seattle is coming back strong.”

The revamp includes building the new Alaskan Way in the footprint of the now-demolished Alaskan Way Viaduct. South of Columbia Street, the new road has taken shape.

In a milestone, on Dec. 11 Alaskan Way traffic in Pioneer Square will shift east onto the new Alaskan Way, while the construction zone moves to the west side. Also, South Washington Street between Alaskan Way South and First Avenue South will permanently change to become a single-lane, westbound-only street.

The new waterfront will have a landscaped park promenade on Alaskan Way along the water and piers, with an adjacent bike path.

Construction is scheduled to start in 2021 on a new pedestrian bridge, stairs and an elevator on Union Street from Western Avenue to Alaskan Way.

In 2022, construction will begin on some of these other elements:

• Transformation of Waterfront Park into a new public space to be called Pier 58.

• Pedestrian improvements to some east/west streets in Pioneer Square to reconnect the historic neighborhood back to the water.

Also that year a new roadway that will connect the waterfront to Belltown will open to vehicle traffic.

In a separate project, the Seattle Aquarium is planning Ocean Pavilion, an expansion of the aquarium.

To help fund its waterfront revamp, the city has created a Local Improvement District. Foster said property owners can expect to receive LID bills in March or April of 2022, later than initially proposed. He said the city council is considering allowing the owners to pay interest-only on their assessment for the first 10 years instead of the full amount. “We're consciously trying to allow the downtown economy to recover as much as possible,” he said.

The new waterfront will have around 5,000 square feet of retail space, mostly in a retail pavilion of Overlook Walk. Foster said major events might bring in lots of other retailers and festival markets and farmers markets. The waterfront will be well maintained by Seattle Parks and Recreation, and Friends of Waterfront Seattle will provide programming, activation and security, he said. “It will be a space that people want to spend time (in) downtown.”

As an indication of that, Foster said people have been really happy with the recently reopened Pier 62. It has security and “ambassadors” wipe tables and offer hand sanitizer and masks. “It just sends a message of care,” he said “I am not going to say it's perfect but it's working well so far.”