How to make master plans that work

Master planning projects are complex, lengthy and critically important to “get right” for their communities, users and investors. A successful master plan focuses on four basic principles:

Placemaking. The best master plans create a framework of blocks, streets and open spaces where people not only show up but also like to be. The design must keep the entire site at a pedestrian scale, so people feel comfortable and engaged. It must activate the plan area edges, so they become part of the vibe even before people enter the core. Connecting everything smoothly to parking and local transit ensures visitors can come and go with ease.

Density management. Dealing gracefully with the implications of density can be the difference between a plan a community welcomes and one they avoid. Whether the site is residential, commercial, or both, the master plan team must develop that optimal scenario between the buildings’ necessities and their size. Parking and infrastructure must also be carefully considered, with nothing overlooked and room enough to grow and evolve as the popularity of a project increases and transportation options shift. 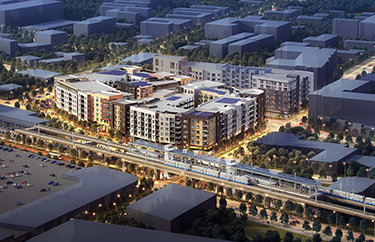 Partnership. Achieving large-scale plans involves many players all working toward the same goal with minimal friction. Success stems from the ability to integrate with diverse teams in a deeply collaborative approach where everyone has a voice and no egos come to the table. Collective thinking leads to plans that cover all the bases and represent the needs of all partners and stakeholders.

To see how these principles apply in the real world, let’s take a look at Redmond Square in Redmond. This is a newly approved second and third phase transit-oriented development master plan project comprising of two mixed-use, six-story buildings over two city blocks. The site is adjacent to a completed first phase single-block development on the edge of the downtown core, with connections to the adjacent under-construction light rail station integrated into the plan.

Its placemaking is reflected in the many opportunities created for people to interact outdoors, with sunny and shaded plazas, lush urban landscaping, and inviting small-scale retail and restaurants. A wide shared pedestrian-vehicular path called the “woonerf” meanders through the plan and acts as both an entrance to, and nexus of, activity. The sunny, southeast side of the development faces the future light rail station over a railroad line converted to a park and trail system that connects through downtown Redmond and beyond. On the south edge of the master plan a large overhang on one of the buildings creates a covered plaza, signaling that an inviting pedestrian experience awaits. The entire plan beckons people to enjoy this urban outdoor oasis.

Downtowns by definition imply density, but the Redmond Square master plan deemphasizes often-related bulk by making the lower levels exciting and interesting. For example, careful use of pedestrian-scaled modulation and materials on the facades reduces the impression of buildings looming over sidewalks, while designing for a variety of storefront experiences helps people relate to everything at ground level in multiple ways.

As with many master plan projects, this one’s key partnership is with the city planning department. They are charged with completing the goals of the comprehensive downtown plan. We worked closely with them to make sure all the hard work and thought that went into planning their city’s urban experience while managing necessary growth as a whole was implemented on the smaller block-by-block scale in the master plan.

Redmond is constantly growing and keen on reducing vehicle congestion, so an important component of foresight was to emphasize the pedestrian angle in support of future regional transit expansion. The new light rail station will have no associated parking structure, so a tremendous amount of effort was placed on defining the paths pedestrians would most naturally take into, through and out of the site. We applied similar thinking toward Redmond’s projected future redevelopment, considering how new pockets of population might interact with what is being created now. The final path of the woonerf was partly instructed by this expected growth.

Master planning projects are integral to the success of every urban plan. Making sure they carefully consider placemaking, density management, partnerships, and foresight increases the likelihood that citizens will thrive in their planned urban environment now and well into the future.

Scott Glazebrook served as conceptual design lead and project manager for Redmond Square and is vice president at Tiscareno Associates.