Is high-rise mass timber finally about to have its moment? 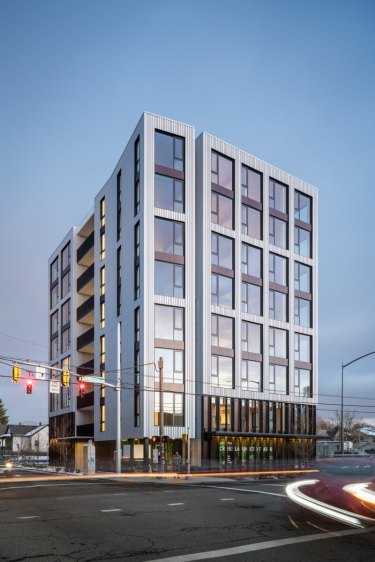 Architects and engineers are looking at high-rise mass timber structures, meaning those above six stories, as a way to build more environmentally. These buildings consist of a type of reinforced wood that is made by combining multiple kinds of soft woods into one reinforced panel.

Architectural and design firms around the region say the benefits of mass timber are diverse and many. The most obvious are sustainability and a reduced carbon footprint. Mass timber is also easy to mass produce. This means quicker construction times and also requires fewer people in the field, which, in a time of labor shortages, provides another net positive.

A further benefit is carbon sequestration. “Mass timber panels and beams, which replace emissions intensive concrete, steel, and masonry as building materials, become a carbon removal driver because the wood stores carbon dioxide which was captured from the atmosphere and traps it there for an extended period of time. Mass timber also has the opportunity to help drive sustainable forestry management, which of course if done properly, would contribute to reduced wildfires across the nation,” Ben Gist, Principal at MG2, explained.

There is also a natural beauty to building with mass timber and biophilic design is another benefit of working with this material.

“Biophilia is a trend that we've seen traction across almost all built environments over the past few years, and we don't see it slowing down any time soon. From an everyday perspective, mass timber buildings create biophilic atmospheres and help drive human connections to natural resources and materials while indoors,” Gist continued. 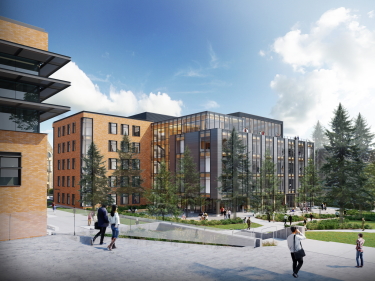 Image courtesy of LMN Architects [enlarge]
The Founders Hall at the UW Foster School of Business is one of several mass timber projects currently in development in Seattle.

Moreover, studies have proven that being in biophilic environments, like those that mass timber can create, makes people healthier, more productive, and relaxed.

Despite these benefits, high-rise mass timber buildings have not yet become a typical feature of American skylines, and especially not in Seattle. Look internationally and the landscape is quite different. London is home to a nine-story mass timber building, the Graphite Apartments; the world's tallest timber tower - measuring in at just over 280 feet high - can be visited in Brumunddal, Norway; and Japan recently announced plans for a supertall wooden skyscraper in Tokyo by 2041.

In 2018, it looked like high-rise mass timber might become the future of America's ‘sustainable cities,' particularly in the Pacific Northwest, after Oregon and Washington became the first states to change the regulations around mass timber buildings. Before the change, mass timber projects had been limited to six stories, after, they could be built up to 18.

In Seattle, excitement, conceptual designs, and case studies followed the code change, such as the DLR Group's conceptual design for a twelve-story mixed-use ‘timber tower' in the downtown area. Nevertheless, there was no explosion in high, or indeed mid or low-rise, mass timber buildings, and the Emerald City remained dominated by concrete and steel.

Since the code change, Spokane and Portland did see the erection of some mass timber buildings, including high-rise ones. In 2018, work was completed on Kaiser Group and Path Architecture's groundbreaking mass timber project in downtown Portland, Carbon-12. At 85 feet tall, and eight stories high, Carbon12 is the tallest mass timber and cross-laminated timber building in the country. In Spokane, Katerra designed the Catalyst building, a four-story mass timber build, which opened on the campus of Eastern Washington University in 2020.

Before filing for bankruptcy in June 2021, Katerra also had plans to build a 16-story mass timber tower in downtown Bellevue.

“It's a little perplexing that Seattle hasn't been a leader in the emerging market of mass timber, especially considering Seattle has always been ahead in environmental stewardship,” Craig Curtis, Director of Emerging Building Technologies at Mithun, reflected.

Washington is also a state rich with some of the nation's best timberlands, making mass timber a seemingly obvious choice for the region.

“From what we've encountered, the biggest hurdle is cost, but a very close second is a fear of the unknown. Because mass timber is still relatively new and quite expensive to construct upfront, there aren't many developers willing to be first to take the risk in that investment, having to be first to “work out all the bugs”, so to speak” Ben Gist explained.

“Sometimes it just requires a pioneer and then others will follow,” Curtis concurred.

A quick look at projects currently in development and under construction suggests that this moment might have come.

Several firms have mass timber projects on their radar, including some high-rises.

LMN Architects Founders Hall project at the University of Washington Foster School of Business incorporates significant mass timber elements and is projected to open in 2022.

Shorenstein Properties and Weber Thompson are planning a new mass timber office building at 235 Ninth Ave. N. in South Lake Union, and FA Johnson Development is planning to buy and redevelop a corner site in Ballard for a mass timber project, at 904 N.W. Market St.

“We believe that the consumer demand for work/life spaces is growing, particularly post-pandemic, and that there's a huge opportunity for those willing to take the leap and invest in mass-timber high-rises. We feel like in early 2022 we're going to see an increase in the adoption of mass timber high-rise environments. Younger generations, ones who have grown up with sustainable lifestyles top-of-mind and are more likely to invest in responsibly built spaces that they know will help offset carbon footprints, are gaining more purchasing power every day. Mass timber might be more expensive, but education has and will continue to play a huge role in helping consumers understand why it's worth investing in, which inevitably will increase demand to a point that developers can no longer ignore. The tipping point is coming,” Gist said.

Curtis also feels like the tipping point is near.

“Mass timber builds are something that both myself and Mithun are very passionate about and almost every client we have are curious about the material. With the covid-19 pandemic, I also think people are more conscious about the importance of a healthy work environment which is something that mass timber offers, ” he explained.

Jooyeol Oh, also a Principal at MG2, hopes that we might soon see mass timber buildings that reach beyond the 18 stories currently allowed.

“With a current limit of 18 stories in Washington state for mass timber buildings, it's hard for developers to consider using that construction method when they can go higher with other materials. What we're hoping to see is with each incremental update to the code updates, additional floors are added. This will not only help traction for developer interest since they can build higher but also allow Washington as a state to compete with states like Wisconsin, which has a 25 story limit on their mass timber buildings,” he explained.