The By Belltown mural project: art to regenerate a community 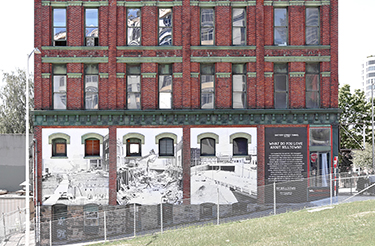 Photos by Aaron Asis [enlarge]
The mural at First and Battery Street is the project's “cornerstone.” 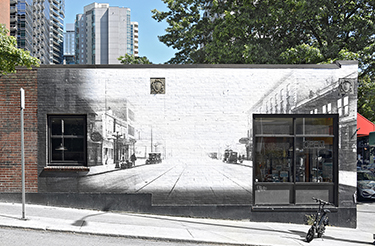 [enlarge]
The murals feature historical images with a twist.

If you've walked around Belltown recently you might have noticed a series of striking print murals on some of the neighborhood's buildings – historical images but with a twist. Described as “a community inspired project created to celebrate the past, present, and future of Belltown” the By Belltown installation consists of four printed murals on four historical properties within half a mile of each other in Belltown's core. Each mural consists of a historical image that relates to the building it is on, as well as words and comments about the area from current community members.

The project is the result of a collaboration between artist Aaron Asis, Belltown United, and the Seattle Downtown Association. The idea for the murals began in early 2020 on a community phone call about the future of the neighborhood, which like many other urban areas, has been greatly impacted by the covid-19 pandemic.

Asis had been thinking about possibilities for art on the building at First and Battery - which he calls the cornerstone of the project – for a while. When covid hit, he saw a unique opportunity to do something more with Belltown's buildings and provide a counterpoint to the many boarded up storefronts that were becoming an all too familiar site.

The vision was to create an installation that fused the past, present, and future and asked the community to think about where they have been, where they are, and where they can go moving forward.

“This project – like most of my work - is not about putting forward a specific message or my point of view as an artist but was more about using art as a way to build and encourage community,” Asis explained. “I hope when people see these pieces, they will start meaningful conversations about the community and neighborhood. The core idea was to create an experience that combines the past and present and which challenges us to think about how the community can move forward in an informed way.”

The project was also influenced by the pandemic and a want to get people back out on the streets to regenerate community after many months of isolation. Funding for the project came from the Seattle Downtown Association as part of its wider campaign to re-open Seattle's downtown this summer.

“We hope that the murals will not only encourage people to get back out on the streets but we also want people to see them as sort of a reward for re-engaging with the community,” Asis continued.

The over 500 feet of murals were erected over ten days in June and are intended to remain through the end of the year. They can be viewed at 1st and Blanchard, 1st and Bell, 1st and Battery and 3rd and Battery. The mural at 3rd and Battery is the largest. It consists of three images of the construction of the former Battery Street Tunnel alongside a text panel of community responses to the question: what do you love about Belltown?

Images for the project were found and supplied with support from the Seattle Municipal Archives, University of Washington Special Collections Library and the Washington State Office of the Secretary of State. The words are from a community survey sponsored by Belltown United and the Seattle Downtown Association.

Belltown United is a neighborhood coalition composed of volunteers dedicated to advocating for the interests of neighborhood businesses, property owners and residents. The Downtown Seattle Association is a non-profit whose mission is to create a healthy, vibrant downtown.

“This is a project all about bringing people together – from the many different groups and individuals who brought it to life, to those who will enjoy and interact with the murals,” Asis concluded.