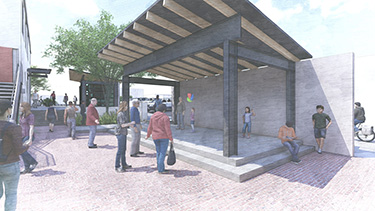 Rendering courtesy of Michael McMurray by ARC Architects [enlarge]
The urban plaza has two small stages for music and events.

Main Street Commons, at 550 Main St. in Edmonds, aims to bring a little bit of Europe, and a lot of community spirit, to the Pacific Northwest town. The development, which a member of the Edmonds Architectural Design Board called “visionary and transformational,” is based around a plaza concept more commonly seen in urban areas across the pond.

The project sits on a half-acre in the heart of downtown Edmonds and consists of two buildings with an urban plaza in-between. One of the buildings is an existing 1950s warehouse originally home to the town's Thriftway grocery store. This 7,000-square-foot building has been redeveloped and divided into two retail spaces. One will be occupied by a bakery, the other a restaurant. The renovated warehouse also has a 2,000-square-foot mezzanine level which has been transformed into a game room complete with a mini-bowling alley.

The second building, called the Commons Building, is two stories of new construction. It houses three retail spaces on the ground level, which will be occupied by an ice cream shop, coffee shop and likely a wine bar. The upper level is 2,800 square feet of event space and includes an outside deck.

Around a third of the Main Street Commons site will be kept as open space, which includes the plaza. The plaza will have two 10-by-7-foot stages for music and events, string lights will be hung between the two buildings to light the area, and there are plans to plant a 20-foot dwarf noble fir in the outside portion of the development. There will also be a new parking lot and civic art elements. A mural, currently being worked on by the Edmonds Mural Commission, is set for the roof of the old Thriftway building. Another is planned for a south side alley on the new building.

“I think the pandemic has really shown the value and importance of outside civic spaces that this development will provide,” Michael McMurray, owner and developer of Main Street Commons, said.

The McMurray family purchased the project site in 2017 after learning that it might be bought, bulldozed and turned into condominiums.

“I grew up here, my young family lives here, my dream was one day to bring something creative and special to our town, with more balance/respect of open space, arts, civic elements, and of course new exciting businesses,” McMurray said when asked about his initial vision for the site.

“The spot was essentially a hole in the middle of town so our question was how do we fill it in a way that feels authentic to the area?” McMurray continued. “The development and design is driven by what we believe would best assimilate into the town and environment making sure that it fits with the scale and culture of the community.”

David DiMarco of DiMarco Architecture is the lead architect on the project and has worked closely with McMurray on Main Street Commons.

In addition to the plaza concept, the design of the entire development is inspired by the original warehouse and is intented to look mid-century. The 1954 warehouse has been stripped down to its bones to showcase a high arched ceiling with original laminated wood beams. Large windows have been added to let in as much light as possible and open up the space.

The newly constructed Commons Building was built with brick and is also designed to look like a warehouse.

Steel, brick and glass dominate the project infrastructure, giving it an industrial feel, which is then softened by lighting and vegetation in the plaza, sidewalks and alleyways surrounding the buildings.

McMurray hopes that Main Street Commons will become an important and popular gathering space for the Edmonds community, who he has made sure to involve in the project since its inception. Many elements, including the plaza stages and game room and bowling alley, are the direct result of community suggestions and feedback. McMurray also shared that he envisions the plaza being used for annual civic events (such as an Oktoberfest-type celebration) and as a home venue for local bands.

Another unique element of the project resulting from community engagement is a display area for the local fire department's historic 1938 firetruck. This display will be located in an alleyway adjacent to the Commons Building. The firetruck display was designed by Paul Ross Curtis of ARC Architects, whose dad was a firefighter.

“Whenever I saw that truck as a kid, or whenever my kids see it today, they light up, there's a little bit of magic to it,” McMurray said.

McMurray had hoped to finish construction and have Main Street Commons open by last fall, but with ongoing supply chain and labor issues, and of course the pandemic, he now thinks that this fall is the best case scenario for completion. However, he expects that the bakery in the Commons Building will be open this spring. The total project cost is around $6 million.

“It's been a long but rewarding project and I'm excited. I wanted to try my best to create something the community and my family would be proud of. This could not happen without the love and support of my family, especially Bob and Kathy Waltz. This development will be my family's gift to the town,” McMurray concluded.

McMurray is still looking for tenants for some of the spaces. Tracy Cornell with Gibraltar Investment Property Solutions is the listings broker. Adam E. Cobb of Windermere was McMurray's consulting broker for the original purchase of the site.