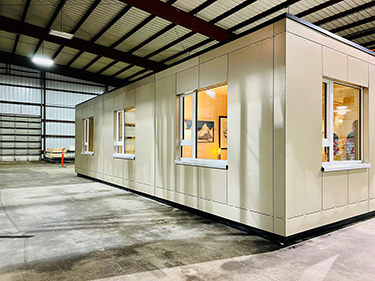 [enlarge]
Residents will enter the unit via a hallway that houses all the utility systems for the unit.

Affordable housing, and how to build more of it, has been a hot topic in Washington for many years. Forterra recently unveiled its latest effort in the nonprofit's quest to bring a more sustainable and attainable solution to housing: the first all-cross-laminated timber (CLT) modular prototype in the United States.

The prototype is a two-bedroom, one-bathroom unit measuring approximately 1,165 square feet. It is made up of three modules. The prototype was developed in partnership with Zaugg AG Rohrbach, a Swiss timber construction and manufacturing company. It was assembled, plumbed and furnished in 22 days. Future construction and assembly is expected to take just three hours once production is up and running at the soon-to-be-built Darrington Wood Innovation Center in Snohomish County.

(Editor's note: The size of the prototype unit has been updated.)

The prototype is part of the Forterra-led Forest to Home initiative, a program that creates local affordable housing built by local labor with resources from regional forestlands. The Forest to Home initiative operates as a vertical supply chain starting with Washington's forests. Timber is harvested and then sent to a centralized innovation center, which houses the mass timber and modular production facilities, in the timber town of Darrington. At the same location, the modular homes are fully assembled, appointed and customized to buyer specifications. The modular homes are then delivered to urban and rural communities at a lower price point than a traditional build due to the supply chain innovations.

“What's exciting about these CLT prototypes is that they offer both a solution for solving the sustainability crisis and for building affordable housing at a lower cost,” Tobias Levey, vice president of transactions at Forterra, shared. While CLT is becoming a more widely used and known building material in the U.S., Forterra's prototype is the first use of all-CLT in modular construction in the U.S.

Modular housing is already being effectively mobilized as a quick and affordable solution to create more housing but building these structures using CLT brings additional benefits, most obviously environmental and sustainability ones. Moreover, in a heavily forested state like Washington, using this material will create new well-paying jobs not as easily affected by the supply chain issues currently blighting the construction industry. In addition, studies have shown many physical and psychological benefits to living in mass timber structures such as reduced stress and increased levels of happiness.

“We are re-connecting the well-being of people and nature,” said Michelle Connor, president and CEO of Forterra, in a press release. “With Mass Timber, we can sequester carbon, produce clean water and build cost-effectively — through good rural jobs and homes priced for working families.”

Levey continued, “The use of Modular CLT has the potential to replace more carbon-intensive building practices. Compared to traditional building practices this model can be successful because the work is performed in the safer, climate-controlled environment of the factory, therefore the time and cost to build these modular homes is significantly reduced.”

Forterra has four all-CLT large-scale multifamily modular projects underway in Tacoma, Tukwila, Hamilton and Roslyn. The Tacoma project, in the historically Black Hilltop neighborhood, will consist of 80 modular units. Communal spaces in the development will be decorated with art and sculptures made by local African-American artists, which adds another local element in the Forest to Home initiative supply chain. The artists will first activate a vacant former Rite Aid building on the property where they will create art for the new housing and commercial space to come.

The units for all four projects and future Forest to Home developments will be built at the Darrington Wood Innovation Center, a $115 million, 93.6-acre facility which will break ground this year.

The Darrington Wood Innovation Center (DWIC) is a collaboration between the town of Darrington, Snohomish County and Forterra. The first phase of DWIC will consist of three components: a small European-grade remanufacturing sawmill and kiln facility; a CLT plant; and a modular fabrication facility. Estimated completion of the facility is the end of 2023. Imco Construction is the general contractor.

“With continued innovation and scale we believe that CLT modular housing can have an important role to play in tackling the affordable housing, climate and homeless crisis in Washington,” Levey concluded.