Solera is a master plan community in the Seattle suburb of Renton combining mixed-income housing with commercial into a single complex with a family orientation. As the lead architect for the Tiscareno Associates portion of the project, I have overseen the design of Solera’s rental apartments and commercial space and can attest to the challenges that arise from a multi-use project of this scope. But projects like Solera hold opportunities too, for a future in which they will become increasingly relevant. In this piece we’ll look at some of those challenges and opportunities, and what we have learned from them.

With approximately 37,000 square feet of commercial space, 590 rental apartments, and as many as 96 attached townhomes on over 10 acres, Solera is first and foremost a huge development. The city of Renton was looking to revitalize a neighborhood whose former affordable housing project on the site didn’t have the density needed to optimally address the housing crisis that has plagued King County in recent years. To its credit, the city took the long view, seeking a developer with a broader revitalization vision than just replacement of the affordable housing.

After other developers failed to make such a project pencil out, Bellevue-based developer DevCo proposed one that did: a vibrant mix of affordable rental apartments, market-rate housing units, community amenities, a daycare, and flexible commercial space on a site adjacent to planned bus rapid transit, parks and a new public library. 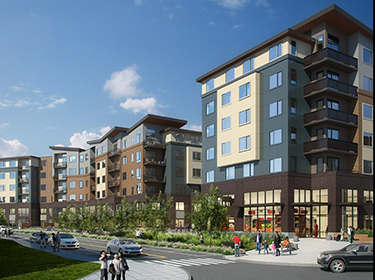 Photo courtesy of Tiscareno Associates [enlarge]
Solera in Renton combines mixed-income housing with commercial into a single complex with a family orientation.

When Tiscareno was hired to design the two buildings that comprise the commercial and rental properties of Solera (the townhomes are being designed independently), we knew that the people who used them would need adequate space both to circulate within their own homes and to navigate throughout the complex. We knew we had to be both good listeners — to provide what the community wanted; and experienced planners — to provide what we knew they needed. If we forget that such a project needs a giant trash room, for instance, with the traffic circulation needed for garbage truck access, it’s very difficult to fit that in later. These are issues that need to be addressed in the very early stages of design.

Another challenge in creating mixed commercial and residential environments is that in the design phase, you don’t know who the commercial tenants will be. Different types of businesses require different circulation paths, ventilation, restrooms, parking, and more. Perhaps the most unique aspect of Solera is its dual-identity as a family-oriented housing project and a commercial project. This brings the potential for a symbiotic relationship between residential and commercial, which is being maximized at Solera with a daycare and other possible tenants to serve the “family/community” identity.

Still, the residential and commercial identities of these multi-use projects need to be kept distinct — a tall order when both share both buildings. For privacy, access to residences needs to be kept separate from access to businesses. You want to ensure that home feels like home for the residents, so you wouldn’t put the apartment door next to the popular pizza joint, for instance. For this reason we worked with the city to make sure we were permitted to put the residential entryways along the quieter “back side” of the development, with the commercial entryways on the more visible “front side” along the state route. Likewise, both buildings have courtyards that are not public space but private to the residences — all part of a concerted effort to imbue the private portions of the buildings with a more tranquil sense of place while dialing up the accessibility of the public parts.

These dual identities can be signaled with different design features, and we worked hard to make the buildings read “commercial” and “residential” as appropriate. For instance, we clad ground floor commercial space in a regular pattern of high, dark brick masonry columns and glass storefronts for a modern look, then incorporated warm wood-like siding and painted panels in neutrals above with balconies and shed roofs to signal residential areas.

Notably, another area of differentiation was not architecturally signaled: the affordable housing versus the market-rate apartments. The developer originally intended both designations to share space within both buildings, but lenders are still reluctant to fund such projects. As a result, most of Solera’s affordable-housing units are in one building and all its market-rate units are in the other. We designed them so that passersby would have no idea which is which. Both have similar amenities spaces and parking spaces. Without making them identical — they have slightly different color palettes and different modulation to accommodate different unit mixes — we gave both buildings tripartite facades and dark neutral colors to reinforce a sense of unified community.

DevCo’s niche is affordable housing for a demographic group not typically provided for in multifamily developments: larger families. Thus the “different unit mixes” mentioned above refers to the relative preponderance of multi-bedroom units in the affordable-housing building — including a whopping 45 four-bedroom units.

Most of the time, multifamily architects are tasked with squeezing as many units as possible onto a given site, a charge we all know can bring headaches of its own. But Solera’s even greater challenge required us to take the multi-bedroom units originally spread across both buildings and puzzle-fit them into one. Since the four-bedroom units are most practically situated on corners, this was a thorny challenge, driving the shape of the buildings and dictating more and smaller windows (so that every room could have an outlook) than smaller units require. Here it’s worth noting that the affordable-housing building at Solera, which wound up with 275 units, is large enough to fit closer to 375 units of the size that are more typical of these projects. Density limits in Renton do exist, which is one reason other developers were unable to make this project work financially.

That family priority extends to the amenities DevCo has planned for the community, which in addition to the typical meeting rooms, business spaces, fitness centers, and coffee lounges include an indoor half-court basketball gym in each building and play areas on the courtyard level of the affordable housing building.

Finding space for these extra-large facilities was something we knew we had to plan for early on. Adequate parking presented a similar challenge, as DevCo bucks the current fewer-parking-spaces trend in favor of supporting lower-income workers’ more frequent use of cars over transit to commute. The goal was 1.5 parking spaces for every apartment, which is more than we’re seeing most places — certainly more than we see in Seattle, where no parking is required for apartments. So we designed a large parking garage beneath Solera and constructed the buildings in a “wrap” formation, to conceal much of the rest of the parking behind it in compliance with the city’s zoning codes.

Once complete, Solera will be a new kind of multifamily development. With this much parking, a location in a bedroom community with wilderness close at hand, nearby single-family neighborhoods, and a strong family orientation, Solera will present a clear suburban identity. On the other hand, its location on a state route in a recently up-zoned neighborhood, proximity to multiple transit options, walkable shopping, and public library across the street bring a definite urban flavor.

We think projects like Solera are helping to blur the categories “suburban” and “urban” into a new kind of hybrid. Many of Seattle’s former bedroom communities are urbanizing with higher density and mass transit, because density and transit promote sustainability. At the same time, Seattle’s urban core — amply stocked with multifamily units built for singles or roommates — remains painfully low on affordable units for larger families. It may be that “hybrid” developments like Solera can offer just the kind of crossover template this moment calls for.

Mark Stine is a principal at Tiscareno Associates and has spent more than 25 years as a designer, architect and manager in many different project types.