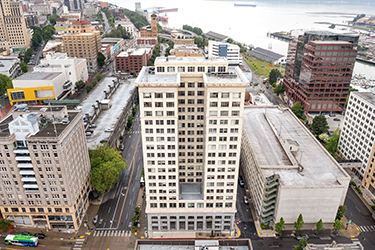 Photos by J2G Creative [enlarge]
When it was built in 1925, the Washington Building was the tallest building in Tacoma and second tallest in the Pacific Northwest.

Tacoma's historic Washington Building, at 1019 Pacific Ave., is now the site of 156 new apartments and 12,000 square feet of retail/commercial space.

Renamed The Astor, the 18-story building, constructed in 1925, had been offices when Unico purchased the property in 2016 for $9.8 million. In 2020, Unico and partner, Pinnacle Partners, a Qualified Opportunity Zone investment firm, began work on the conversion, which is now complete and renting.

The property features studio, one- and two-bedroom apartment homes. Rents start at $1,500 for a studio and $2,286 for a two-bed one-bath.

In a press release, Unico said the “building embodies rich regional history while delivering modern apartment homes to downtown Tacoma.” Many original finishes of the landmarked property have been preserved including a marble-clad lobby and terrazzo flooring. This is juxtaposed by modern furnishings and finishes in the units. Residents also have access to a host of modern amenities that include a renovated penthouse with rooftop amenity deck, a fitness center, theatre room and penthouse lounge.

The Washington Building was originally commissioned as the marquee headquarters for Scandinavian American Bank. The property's historic bank vaults have now been turned into a resident speakeasy-style bar and cocktail lounge. The historic bank space will also soon be home to a Great Room, where residents can work from home outside of their unit. Later this summer, Jin Jin Matcha, a matcha tea cafe, will occupy the corner retail space. 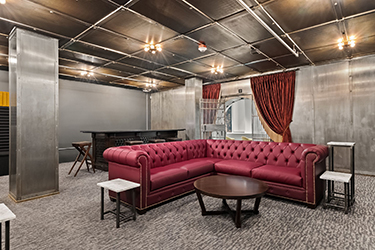 [enlarge]
A historic bank vault, dating from the 1920s, has been converted into a speakeasy for residents.

“As a longtime investor in Tacoma, we're excited to deliver a project alongside Pinnacle Partners that brings to life some of the region's richest history,” Gina Pfingston, Unico investments and development manager said in the release.

Julie Currier, Unico vice president of development and Tacoma native added, “We've been working with the city of Tacoma and we're proud to be a part of restoring this beloved building and revitalizing the area in a way that celebrates its history, especially after the challenges we faced, like all developers, in starting this project at the height of the pandemic.”