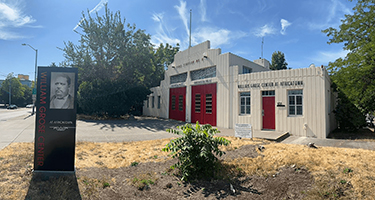 This week, following a year of renovations, Africatown Community Land Trust opened the doors to the William Grose Center for Cultural Innovation and Enterprise. The new center is located in historic Fire House 6 at 101 23rd Ave. in the Central District.

The City of Seattle transferred the building to Africatown in late 2020 and has signed a 99-year lease with them for the property. This followed almost ten years of advocacy for Black community ownership of the facility which began in 2012 when the city revealed it was planning to sell the building. At that time, the station had been decommissioned for several years and was being used to store Seattle Police vehicles. Fire Station 6 was built in 1932 and stands out for its art-deco architecture and an eye-catching window installation featuring a series of ‘lightning bolts' at its front entrance. The window was installed in 1998 as part of a renovation project and was designed by Spokane artist Askman and Ziegler.

Tenant improvements for the William Grose Center were designed by project architect Environmental Works and took around a year. Africatown told the Capitol Hill Blog that it worked with many Black-owned contracting firms on the project. Quality Woodworking and Construction was the general contractor.

The new cultural center is 8,130 square feet and is named for the early Seattle Pioneer, real estate developer and founder of the Central District, William Grose (1835-1898). Grose was the city's second black resident and the wealthiest nineteenth-century member of Seattle's black community.

Africatown describes the center as “an economic incubator that supports entrepreneurship and workforce development... with an emphasis on innovation through training the next generation of tech leaders.” The center will host programs, training and networking events in classrooms and other workspaces. Portions of the building have been converted to offices for Business incubator by Africatown Community Land Trust .

“We see the center as an epicenter and nexus for building and growing Black innovation and technological development,” CEO of Africatown Community Land Trust, K. Wyking Garrett, told the DJC. The center reports it has partnerships with the UW Paul Allen School of Computer Science & Engineering, Renton Technical College, Salesforce, and All is Well Studios.

Funding for the renovations came from a $1 million grant from the City of Seattle Equitable Development Initiative and $400,000 in donations from KeyBank, Boeing, and Kaiser. A ribbon cutting ceremony and open house is being held today from 4 to 7 p.m. to mark the opening. “We are excited to build on the over 140-year legacy of black innovation and entrepreneurship in the Central District that began with Grose,” Garrett concluded.