Design Perspectives: Art in infrastructure is not a pipe dream

Our new president says we've chosen hope over fear. I hope so. But with a recession that is deepening daily, it's the season for reviewing our choices, and even reevaluating the whole choosing process.

It's not an easy time to talk about funding for art. But last Thursday, the Seattle Art Museum sponsored a panel called “Art, Design and Sustainability: A Dialog” at the Paccar Pavilion in the Olympic Sculpture Park. 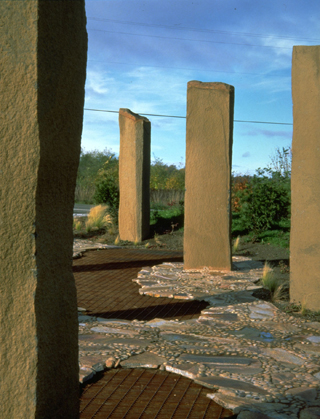 Photo by David McDonald [enlarge]
This landscape at Waterworks Gardens is monumental, with natural basalt columns standing on a surface paved with rock interspersed with grates that cover the gray water flowing into the site. Lorna Jordan is the artist for the gray water treatment site in Renton.

Faced with hard choices, it is human nature to begin sorting things into two piles: essential and non-essential. Art tends to land in the latter.

Public artists, applied artists and designers of all kinds should be concerned. All seek “the intersection of the rational and the poetic,” in the words of architect Tom Kundig, who was on the panel.

It shouldn't be necessary to make art a line item. But neither should designers have to sneak in the poetry. Ideally, public places and art should go together as a matter of course, and a matter of democracy.

Aligning art and sustainability is surely the next step, and SAM is well positioned to lead. Even though the Olympic Sculpture Park was supported mostly by private non-profits and individuals, it set several new precedents for making works of art part of the public realm. It's taken its place as one of the most popular spots in the city, adding immeasurably to the pedestrian environment and connecting it to the sound — all while recycling industrial land and creating a bridge over an arterial and a railroad.

There were three panelists last week, in addition to moderator Lucia Athens, who was the city's longtime Green Building Program manager. Athens is now senior sustainable futures strategist with CollinsWoerman. Kundig, of Olson Sundberg Kundig Allen, is a rising star in national and international design circles. As co-founder of the Sustainable Style Foundation, panelist Rebecca Luke represents the extension of sustainability as a value and practice (read local design and materials) into fashion and clothing. Artist Roy McMakin works in furniture and architecture as well as sculpture. His “Love & Loss” and “Untitled” are on display in the Olympic Sculpture Park, and he spoke of the generalized need for artists to create things that will last.

These things — whether they go by the name of art, architecture or some other technical-professional category — are the landmarks that guide us through our days by reminding us in beautiful ways where we are. 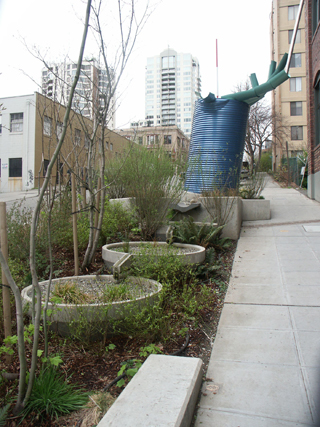 Photo by Clair Enlow [enlarge]
At 81 Vine, Buster Simpson’s playful cistern reaches out to collect filtered rainwater from the building. The water becomes part of the Cistern Steps, a multi-block street improvement that was intended to become part of a series of improvements along Vine Street.

What is essential, almost by definition, is infrastructure. Conventional thinking would hide it all, in pipes or behind walls. Art would bring it out in the open, where it too could be beautiful.

The region has a good start on combining art and infrastructure, thanks in large part to the one-percent-for-art program that local governments have adopted. Over the last three decades, this has resulted in a large number of public works both modest and monumental in scale, from jails to power stations to Seattle City Hall. These projects enrich the public realm at the same time they provide visual and sculptural metaphors for the public purpose.

But some projects actually make art and infrastructure one and the same. Artist Lorna Jordan, who was present at last week's panel, has made a career of such projects, and her first ones are here in the region.

Wedged between the wastewater treatment plant and an industrial-office park road in Renton, Waterworks Gardens mixes poetry and rationality. Two intense, sculptural landscapes anchor a series of wetland pools in a terraced site.

This is art at the forefront of sustainability. As far as the engineering specifications are concerned, the waterworks might as well be three pools behind a chain link fence, without the art. Funding for the artist and the $1.6 million construction project, which began in the late 1980s, came from a combination of funds in Metro's environmental arts program. The collaboration between artist and wastewater engineers, forged in many meetings, resulted in a sequence of pools (and natural filtration), and more plantings and habitat enhancement than regulations call for. But it also yielded better filtration and habitat for humans and other species.

Next door to the sculpture park in Belltown, on Vine Street, the art of infrastructure has been out there for all to see for years. Artist Buster Simpson designed a complex of runnels, downspouts along with a monumental (and whimsical) cistern for capturing and recycling rain water at 81 Vine. The building is owned and renovated by architect Carolyn Geise, who is the chief visionary of a multi-block project called Cistern Steps, which connects this rainwater with the Sound and runs by the Belltown Pea Patch. 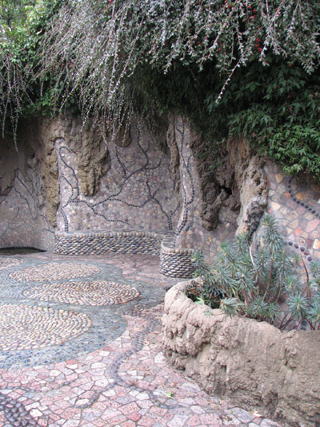 Photo by Clair Enlow [enlarge]
The Grotto at Waterworks Gardens is an outdoor room with a mosaic-encrusted walk and seating, and plants spilling over the walls.

At this year's design awards event sponsored by the Seattle Chapter of the American Institute of Architecture, one example of artful infrastructure was recognized, in the unbuilt category. Atelierjones' VO Shed is a cross between industrial design and architecture. As a beautiful, convenient and very practical recycling station for oils, it's an example of place-making for a new age of sustainability. At the event, juror Nader Tehrani said “something this diminutive in scale could act as a civic structure. A thoughtful garbage disposal. . . that's what we need in the urban landscape.”

These are examples of projects that should get funding, along with support from public officials and staffers. And they should not be one-offs. But they have proved to be very challenging.

Cistern Steps is the product of countless hours of volunteer labor and special attention from city staff. But it was supposed to connect to a much larger series of projects called Growing Vine Street. Lorna Jordan Studio went on to design a series of projects called Westlake Gardens, a part of the city of Seattle's Blue Ring plan for open space, that would slow and display rain water captured on and around downtown buildings. These are just two examples of art-in-infrastructure ideas that remain on the shelf.

They are not pipe dreams. We know that much of our water infrastructure could be designed for multiple benefits, as well as beauty. Cost and funding is a big issue, but ultimately, it is not the most difficult obstacle to building projects like these.

“We spend millions doing it the bad old way, when we could be spending that same money doing it the new, cool way,” said Steve Moddemeyer, long time staff member with the city of Seattle and now an associate principal for sustainable development with CollinsWoerman.

No, the most difficult challenge is leadership and effective collaboration between regulators. There are many reasons not to do something new. Uncertainty does not sit well with scarce resources, urgent priorities and general conservatism. Mixing art with infrastructure is an uphill battle, but it is not new.

President Obama has set up expectations for funding public works as part of an economic stimulus plan. As we look for strategies to recover from what has been widely called the biggest financial crisis since the Great Depression, it may be helpful to look back a couple of generations.

The Works Progress Administration was the largest agency of the New Deal, providing almost 8 million jobs during the Depression and its recovery. Almost every community in America has a park, bridge, school or road constructed by the agency, and some of them are beloved for their artistry. The WPA also operated large arts, drama, media and literacy projects.

This time around, sustainability must be at the heart of all spending decisions, especially the largest ones. The voices that have long argued that global warming does not exist — and sustainability is not essential — are finally fading. What about art? It was part of the stimulus equation in the 30s and 40s. Why not now?

And this time, we can set the bar higher. Art should not be simply a line item, an afterthought or an embellishment. It can be part of the infrastructure solution — not just with buildings and bridges, but with the water treatment and recycling systems of the city.

As Lucia Athens said last Thursday, collaboration is the key. That means bureaucratic and professional boundaries must dissolve. Expertise and certainty must give way to calculated and re-calculated risk.

Cascade Land Conservancy director Gene Duvernoy offered closing remarks after the panel on Thursday. Art and sustainability are both part of what makes the city great and protects the larger natural environment, he said.

These are new ways of thinking about choices, and they are not simple. But then, “It's OK to be complex again,” said Duvernoy.