Project of the Month: Exceptional design calms the chaos of a student fitness center 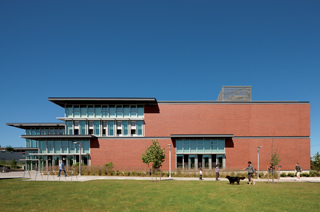 Photos by Lara Swimmer [enlarge]
Students at the community college wanted a new fitness facility so much, they voted to tax themselves.

Walk into the Everett Community College's Student Fitness Center and there is sound and motion everywhere. Balls bouncing in the gym, weights pumping behind a glass wall, music thrumming. It's almost bright enough to be outdoors.

Ordinarily, this would be sensory overload, but this is not ordinary. It's exceptional design. There's calm in the chaos.

Action in the multi-level facility is just far enough away to be comfortable. When you settle into one of the seating areas, the action is channeled over, above and around. It's so easy to be there, that some students use the fitness center as a study hall or meeting place.

It's all a little uncanny. The walls are not quite parallel, and there's a bridge overhead. On stairways and other circulation elements — including mezzanine bridge decks — railings are bright orange.

“The basic design idea is movement through the building,” said Jane Hendricks, principal with SRG Partnership, architect of the building.

To point up the theme, a series of swooping wood sculptures by Everett artist Paul Vexler are suspended over the main circulation spines, which double as a commons. At the meeting place in the middle is a juice bar and seating.

Visible in bright orange above the interior walls of the oversized gym is the track, set like a multi-lane catwalk below the trusses. Runners make the circuit, especially in bad weather. Sometimes there is an assortment of people walking and talking in street clothes and sneakers.

For a long time Everett CC students hiked through a residential area to a 1950s gym. Athletic department chair Sue Grigsby ticked off the problems: It was dark, the pool was decrepit and there were a total of four toilets.

But health and fitness have been a rising priority for students. They wanted a new facility so much, they voted to tax themselves. (The cost hike did not kick in until the building was complete and the students attending could use it.)

The location of the fitness center is an outgrowth of recent master planning for the college, also led by SRG. One of the main ideas is that the campus, which is bounded by single-family neighborhoods on two sides, would grow east toward Everett's long, busy north-south corridor.

With the new fitness center, Everett Community College has a kind of “front door” on Broadway.

“It really was the first move to this sector,” said Hendricks. “It's about giving the college a more city–wide identity.”

The center anchors a growing cluster of buildings that include a new health science building and a community clinic with public access. With a large parking area just across the street, it also connects with an adjacent transit station, and with a newly enhanced street and pedestrian corridor that winds up from Broadway and through the center of the campus.

The fitness center opens to a terraced courtyard where students and visitors can sit in mild weather, or even hold a yoga class. The courtyard will connect buildings in the precinct, including an adjacent health clinic and nursing instruction building now under construction. 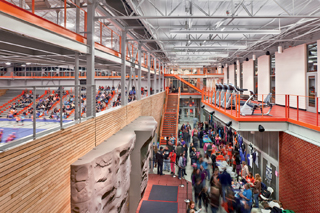 [enlarge]
The center has action on many levels. A climbing wall in the foreground stands behind a juice bar in the commons area. The running track is along the inner gym wall, at upper left.

The basic program was pretty straight forward, according to SRG architect Stan Jaworowski. The dimensions of the gym were determined by the need to include pull-out bleachers for 2,250 people during tournaments. The lockers accommodate varsity teams as well as visitors and regular fitness users.

Grigsby worked hard to tweak the space needs for some of those programs for the architect, and students were involved throughout the process.

The result is a facility that fits their needs almost perfectly.

But luckily for Everett and its community college, that's not all. Perhaps more literally than ever before, this project makes the typical boxed-in fitness facility more visible — and connects it to light and views throughout the interior and to the outside.

“One of the big breaks for us was just opening the gym,” said Zieve. In plan, it's turned slightly in relation to the outer walls of the commons spaces, so that those walls are not quite rectilinear.

Jaworowski ticked off some of the features that won the building LEED gold designation. Daylight and views are almost everywhere. “In the gym, you can play basketball in the middle of the day without lights,” he said.

There are even skylights in the showers and locker rooms. A system of motorized shades provides light control for multiple uses of the gym. There's radiant flooring and all-natural ventilation. Automatic windows at the top respond automatically to elevated CO2. Conduits are all exposed.

“If you don't have to cover up the structure, you are using less materials,” said Hendricks.

There are recycled materials throughout, including a prominent wall clad in maple floorboards from the old gym. A steel foam panel assembly for gym walls helped to keep overall costs down.

Because of the new fitness center, students of this commuter college spend more time on campus. It's convenient when arriving and departing, and that's important. “They don't have a dorm room to go back to,” said Grigsby.

The fitness center might be the perfect ending or beginning of their day.

When students and staff saw the new facility, according to Grigsby, all they could say was “Wow.”

“Campus gymnasia are often massive and solid buildings that are closed off from adjacent spaces and uses. This one creates a dynamic interaction between sporting events and other aspects of student life. The strong use of color, daylight, exposed structure, and interior wall surfacing made from salvaged basketball flooring all contribute to a lively public interior.”

The Project of the Month is sponsored by the Daily Journal of Commerce and the Seattle chapter of the American Institute of Architects. The Project of the Month was selected with the assistance of architect Matt Aalfs, development consultant John Finke, architect and artist Anita Lehman, and architect Matt Rumbaugh. For information about submitting projects, contact Joan Hermann at AIA Seattle at joanh@aiaseattle.org.