Could a mild-mannered structural engineer from Wallingford become Seattle's next council member?

By EMMA HINCHLIFFE
A/E Editor
Photo courtesy of Ken Wilson [enlarge]
Wilson (right) at the city of Redmond/Sound Transit’s Overlake Village Station Pedestrian Bridge, which he is currently working on. 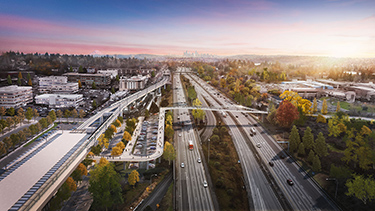 Rendering by Via Architecture [enlarge]
The new pedestrian bridge at Northgate is a project that Wilson is particularly proud of.

Today, the world of politics is full of firebrands, polished branding and snappy campaign slogans. Kenneth Wilson, who is running for Position 8 on the Seattle City Council in November, doesn't fit this mold. Wilson's background is not in politics. He is a structural engineer and small business owner who specializes in bridges and infrastructure.

Go to his website and you won't find high-budget campaign videos. Instead, you'll find a series of short, low-budget films of Wilson talking about some of his favorite places in Ballard, his engineering projects, and some of the issues he sees with Seattle's infrastructure and the way the city is handling it.

The videos were filmed and edited by his 16-year-old daughter.

“With a 16 year old videographer you only get one take,” Wilson joked when we spoke.

His website was also a family affair and was set up by his oldest daughter who is a college senior studying civil engineering.

Though you probably wouldn't know it, Wilson's mark is already all over the city. Some of his projects include the seismic retrofit of the I-5 ship canal bridge, the widening of Spokane Street in the late 90's, repairs of the Magnolia bridge following the Nisqually earthquake and the new Northgate Pedestrian Bridge. Wilson has also had to turn down several new projects to run for the council.

So why would a successful business owner decide to enter the world of politics? Wilson points to several reasons. A big one being what he sees as the city's failure to repair and re-open the West Seattle bridge in a timely manner. “Things with that bridge are not being managed as they should be,” Wilson said.

More generally, he feels that Seattleites are not getting what they need from their council and that a different kind of voice needs to be heard and have a seat at the table. This is a sentiment Wilson says he has found echoed by many community members at the countless meetings and events he has attended during his campaign.

That voice is what you might expect of an engineer: analytical, to the point, and measured.

“I think people see my background and think it is a good starting point for getting things done,” Wilson explained. “Tackling hard problems is what structural engineers do, every project starts with a problem statement and I think that social issues can be effectively looked at the same way.”

There is also a warmth to Wilson that is likely to appeal to voters. Yes, he lights up when talking about engineering and bridges, things that wouldn't excite most, but also when asked about some of his favorite buildings in the city (King Street Station topping the list). He also spoke passionately about his experiences and ability to work as part of a team on his many infrastructure projects – a skill that Wilson feels would serve him well as a council member. For example, when talking about the Northgate Pedestrian Bridge, which is scheduled to open Oct. 2, he noted how Via Architecture helped turn the project into something that he could never have imagined.

“I know how to break apart a problem and then work as part of a team to fix it,” Wilson concluded.

This mild-mannered but to-the-point approach may well be the reason why Wilson clinched second place in a hotly contested field of 11 in the recent primaries.

If he were to become council member, Wilson's three major priorities are to rebuild Seattle's infrastructure, deal with the ongoing homeless crisis in a way that supports the homeless population, business owners and law enforcement, and to preserve and rebuild the city's green canopy.

He faces a tough battle to unseat his opponent, incumbent Position 8 council member Teresa Mosqueda, who in the primary received over 50% of the vote. The election for at-large Seattle City Council Position 8 is Nov. 2.

To learn more about Ken Wilson and his campaign visit http://www.kenforcouncil8.com/.

To learn more about Teresa Mosqueda and her campaign visit http://www.teamteresa.org/.